Howdy, partner!  No, actually, I refuse to start a chapter that way even in jest. Instead, let me start it by saying I BOUGHT THE SIMS 4! It was on for half price, and—having over-budgeted for groceries for the year—I thought I would treat myself. You know, to make up for those nights when I had a microwaved potato and some vanilla frosting for dinner. I made one sim, put her in a lot, then got bored and quit. But that’s okay, because my attention span right now is about as broad as a WOULD YOU LOOK AT THE TIME, I have to go watch Game of Thrones.

In the Land of Langurds, Dax’s death reminded me that Katana is no spring chicken herself—nor, for that matter, is she a seasoned chicken traveler as she set out to become so long ago. For shame. You might say that Old Peabrain gave us the little push we needed to seek greatness. However, he also gave us a bunch of shitty moodlets to hinder the pursuit of said greatness.

But you know, sometimes the first stage of grief is “press a button and magically get over it.”

And the second stage is “don’t give a shit about anything, let’s get wasted.”

And the third is “learn to make your own booze so you will always have an endless supply.”

And the fourth is “become king of France because you are the king of wine and really do the French care about anything else?” 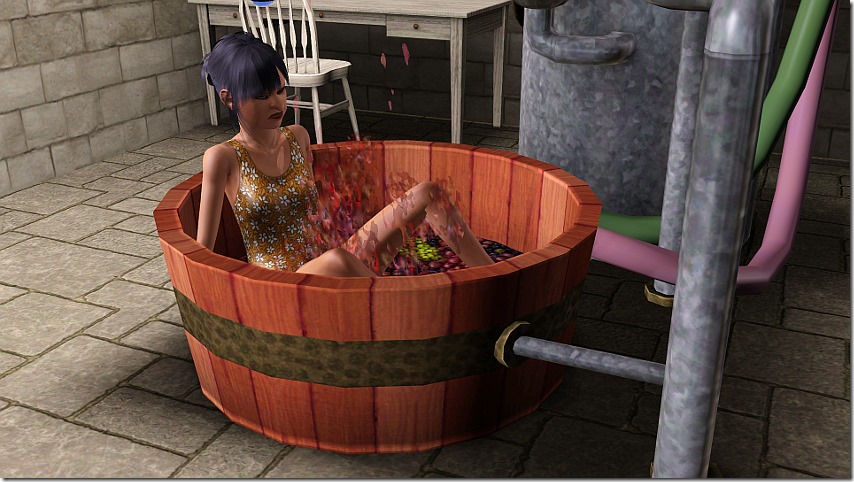 Disclaimer: I do not condone this steep descent into alcoholism.

That pretty much sums up Katana’s travels, so let’s get back to Riverview. 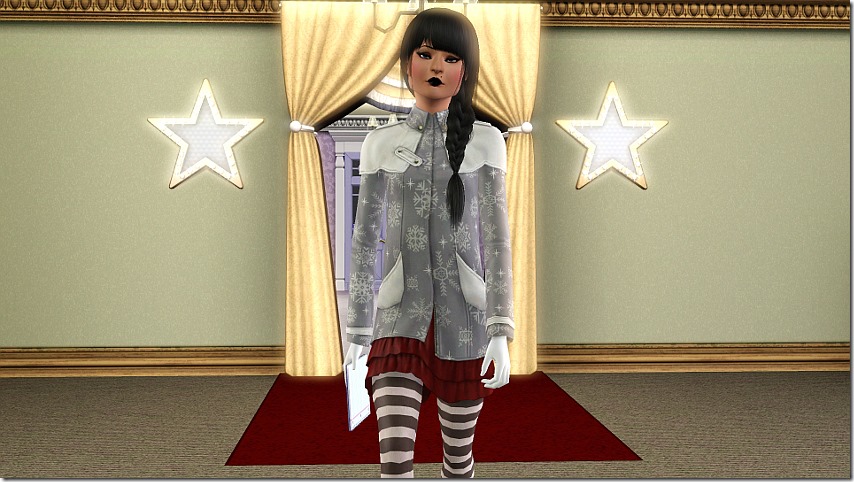 Florin: Hey Lira, what happens if I go in this shiny box?

Lira: Do you fancy being bedazzled and decked out with dolly accessories?

Balboa: Did somebody say “bedazzled”?

Aha, there you are! You can’t hide from the makeover table forever!

Balboa: Ionno how I feel about this “real clothes” thing. Where’s my pyjamas at?

On your legs, dumbass. And just for that, I’m putting this face on the website banner. 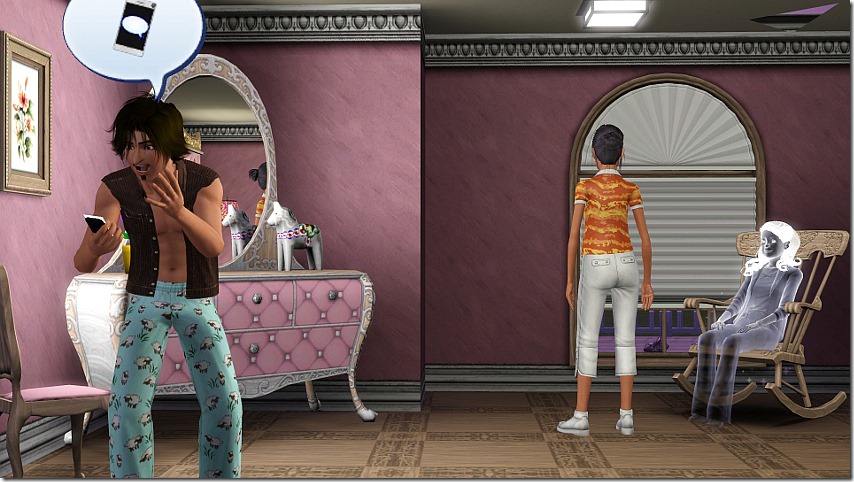 Balboa: Hey Egyptian girl, I just found out how to send a message without using your fingers! How cool is that?

Just five space rocks chillin’ on the front balcony for no reason at all.

Space rocks: We come in peace!

Lira: I can’t sleep, Brother. I’m having nightmares about Papa.

Balboa: Dude, what do you think I’m doing right now?

Lira: Can I tell you a secret? I think I know who murdered him.

Balboa: But he wasn’t— 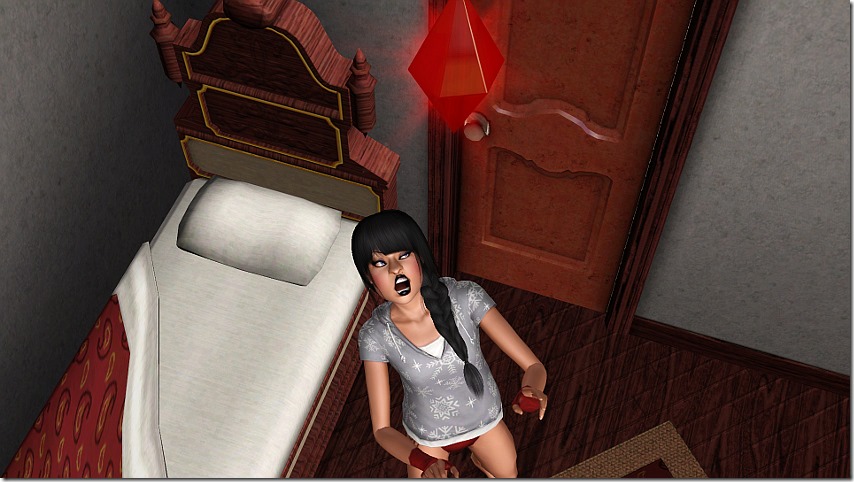 Lira: Which is why I must renounce the world of toys forever and become a real girl!

Lira: Oh dear… what have I done? 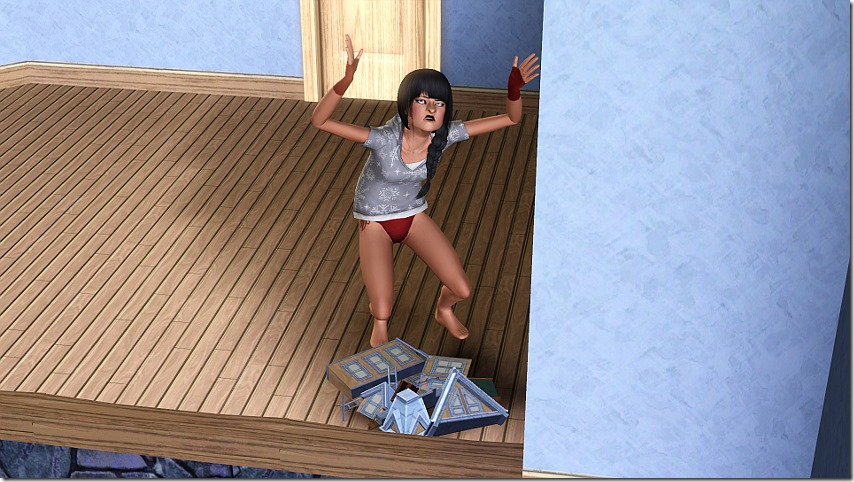 Lira: Dear Porcelain Gods, what can I do to redeem myself? 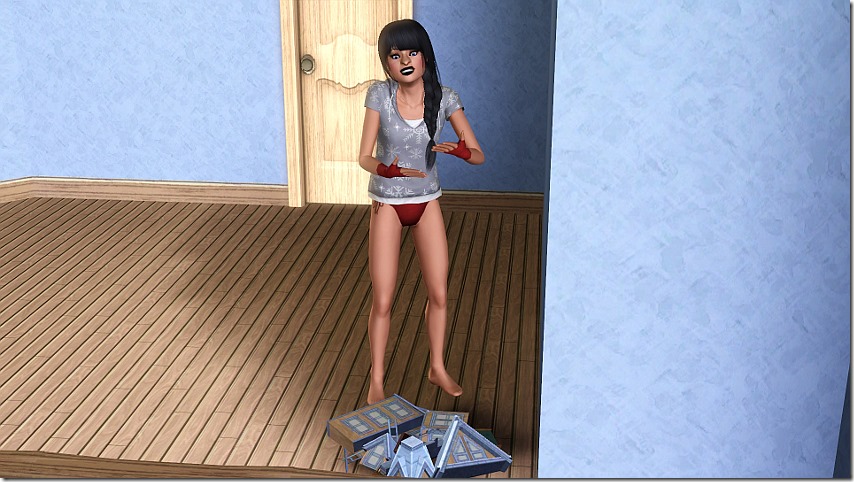 This was all autonomous. It bodes really well for the rest of the generation, you’ll see.

Everyone was surprisingly cut up over Dax. Even his replacement had a breakdown in front of his stepson’s aged-up romantic interest prom date… thing. Dammit Katana, your romantic exploits have made these things so difficult.

Weston: I miss the good times we had together. I’m gonna go eat powdered doughnuts and make a heartfelt collage.

Legitimately the only two pictures I have of them together. Touching, isn’t it?

Meanwhile, the love of his life was quite ready to pick up and move on as if Dunce had never been </3

While we’re talking extended family, remember when this happened? They sure took their time about it, but…

The Langurds and the Darrochs have finally cross-contaminated! (Really, that’s the only term that seems fitting for them.)

After giving birth, Azula discovered the power of invisibility. 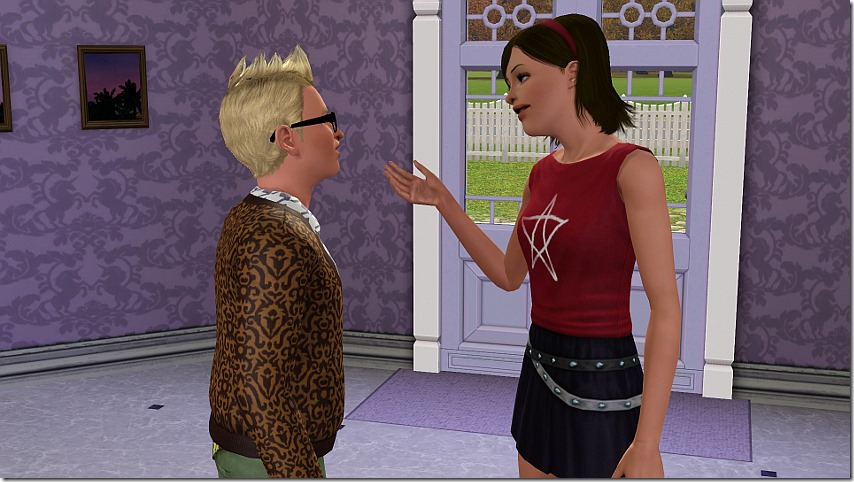 Kacey: So listen, I had this realization that I’m like two days older than you and that’s just disgusting. We’re over.

Florin: Are you sure? ‘Cause I’m totally into cougars. 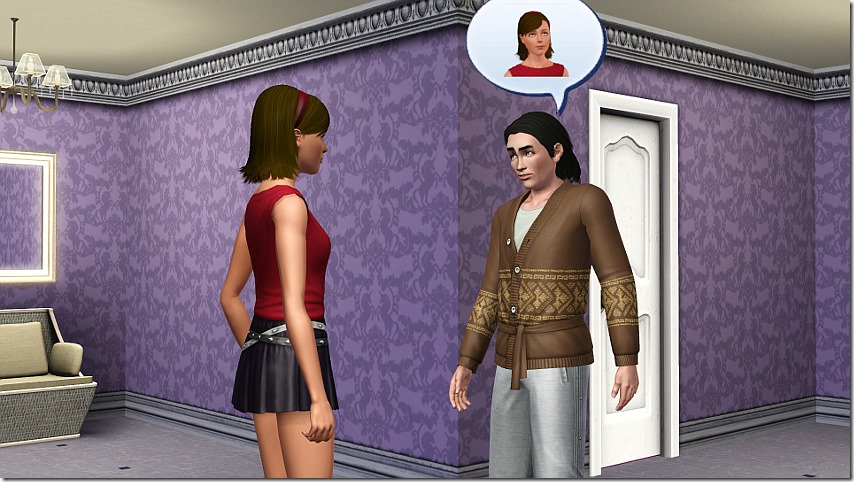 Weston: I hear you’re looking for somebody more mature…

Tbh, the cardigan and sweats are really selling it.

Boa: Dad died on these stairs…

Weston: When was the last time you went outside?

Drachma: Outside is a state of mind.

Weston: Oh my. Let’s you and I go play some catch, okay?

Drachma: Look, Dad! I’m really doing it! I’m frolicking outside and I’m having so much fun!

Drachma: What the fuck Dad. I’m never going outside again. 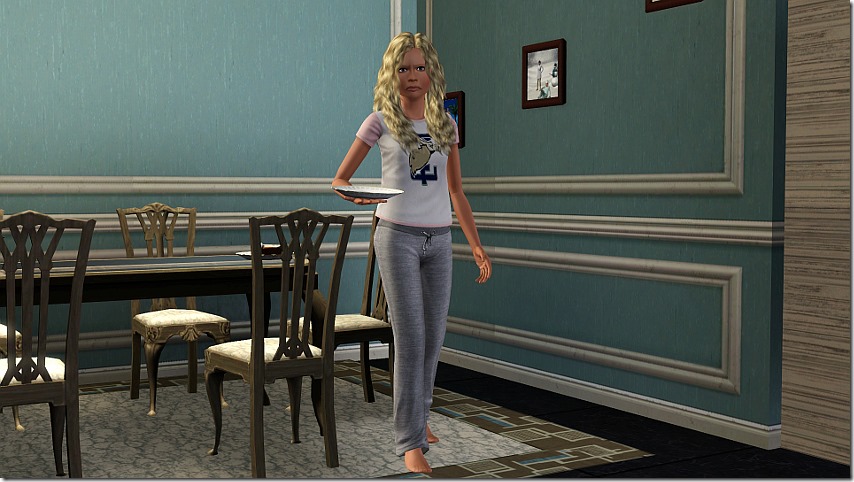 Yep, it’s back to Netflix and bi-hourly snack breaks. Drachma is my hero!

Katana: What is this, a military base for ants?

Lira: No Ma, I’m building that one now.

Yes, it’s that time again—the part of the generation where I realize my heirs have no useful skills, no prospective story arc, and no real value whatsoever. So I stick them in a dark wooden box and force them to find their calling. #notslavery

Or, in Boa’s case, throw them out on the streets to gather bugs because they already have a calling and dammit, there’s work to do! #notneglect

But wait, what’s that going on the background?

It’s a gathering of farm-town folk, picnicking under the Riverview sunset! Simselves included!!

Audrey: If you don’t mind, I’m trying to have a conversation with you.

Sam: Well gee, why don’t I go to outer space so I can hear you better?

Audrey: Eek. You should stick to blogging.

I watched them for so long, hoping they’d become friends…

…but it’s clear that Sim Sam doesn’t know how to Sam.

I stayed away so long that I almost missed this happening.

Florin: How can you just sit there and play games when our stepfather is dead?

Drachma: You’re right, I forgot how close you two were. 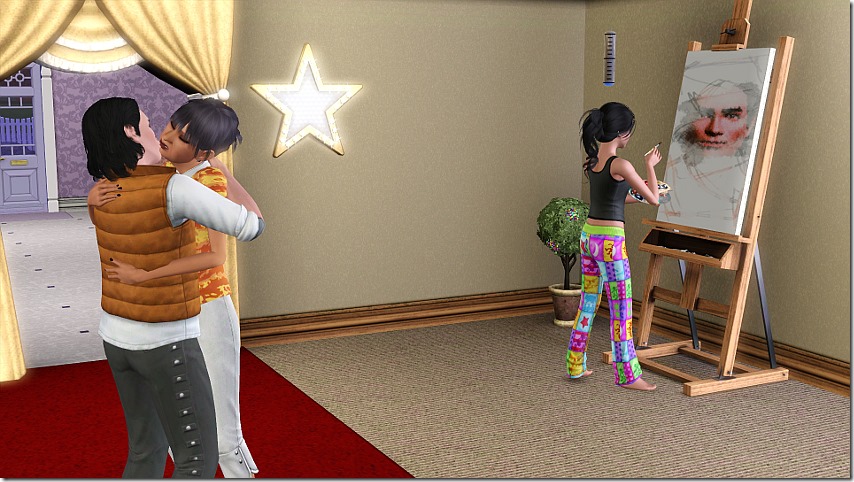 Finally, a change of scenery. 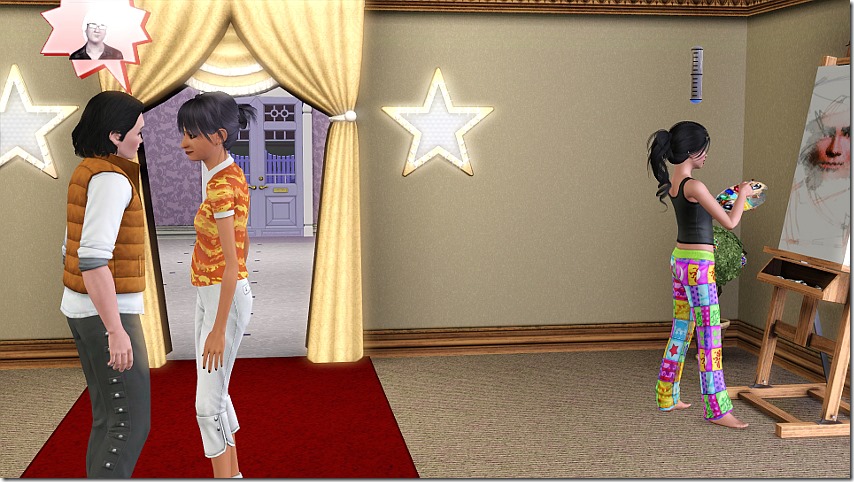 OH FOR THE LOVE OF GOD

Lev: Can I tell you a secret? Lira’s out after curfew and Boa’s doing drugs! Aren’t I your favourite daughter now?

Lev’s tattles did have an element of truth to them. And by that I mean…

…she hit the nail on the head, baby.

I could say the same for Echo Weaver, who thought this generation should be titled “The Psycho and the Druggie.” You guys have no idea. NO IDEA.

And since we’re trying to fit everyone to neat little boxes, I ordered a companion for our most spinstery spare.

Oh look, a poor abandoned Aristocat! Why not take her in, let her melt your stony heart and redirect your maternal instinct?

Drachma: What are you trying to insinuate?

Nothing. Nothing at all.

Drachma: Whatever. I’m going back inside.

Yeah because those three steps out the gate were such an ordeal.

(Kitty’s name is Zorba, after Drachma’s Greek roots and specifically the coolest dance ever, which you can learn step-by-step from a couple of drunk guys here.) 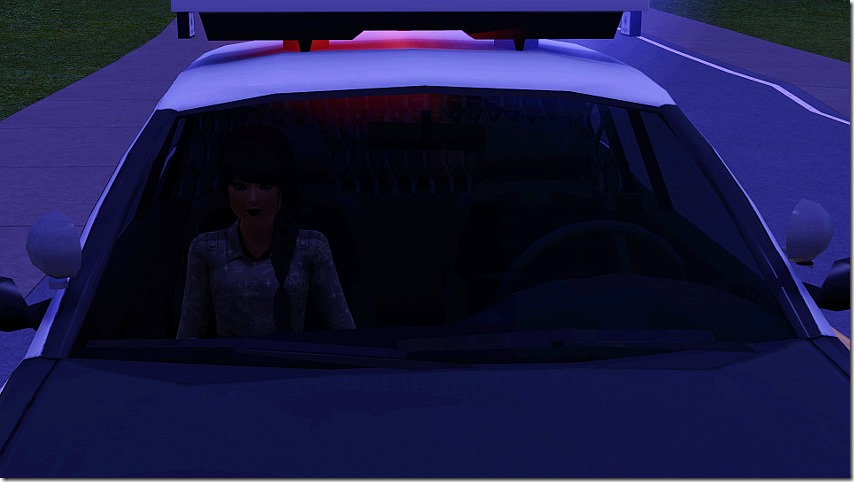 Naturally, Lira got arrested again for terrorizing the suburbs jogging. Like, heaven forbid I should go for a run after dark. I might get assaulted and that’s TOTALLY MY FAULT.

Balboa: You rain shame upon this family!

Lira: Is that any way to speak to your co-heir? Why don’t you sneak off and inhale some more fumes in the shed?

And that’s just what he did.

Now that her kids are the family screw-ups, Katana has taken the opportunity to develop some ambition. She rolled the wish to get a job in business, and since she’s closing in on her LTW and has to rest between trips anyway, I let her go for it.

Her layabout husband also found an ambition of sorts… 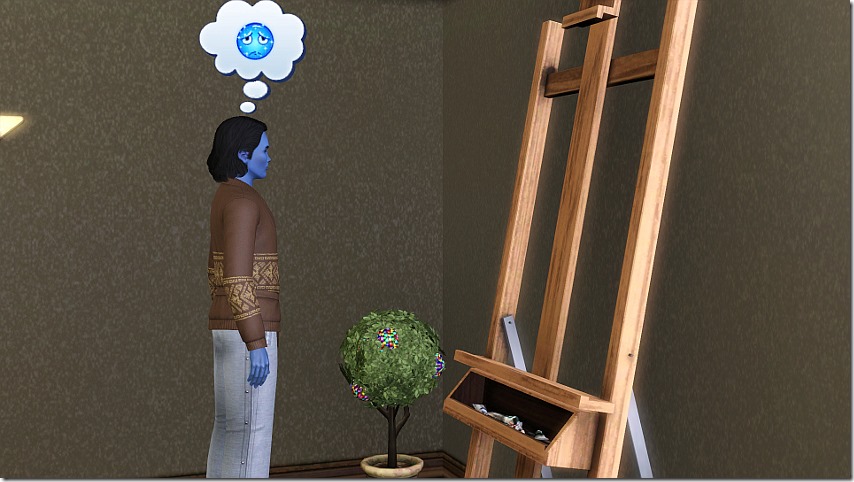 Weston: I just blue myself. Heheheheh 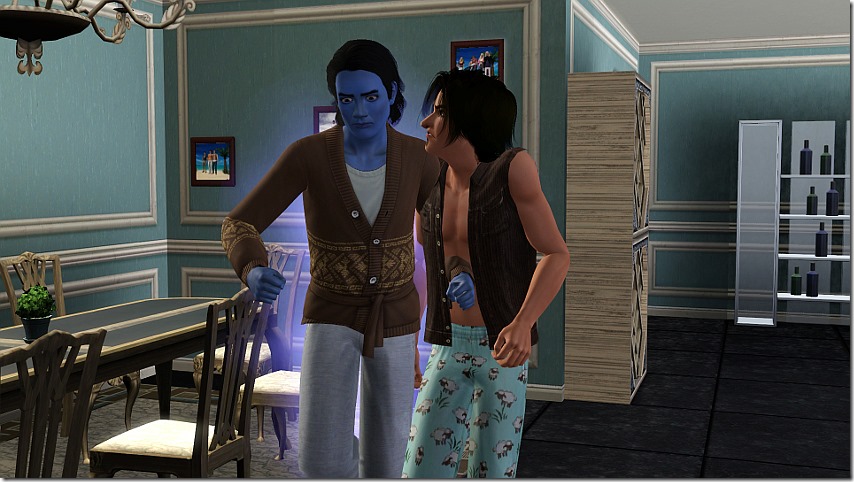 Balboa: It’s started, hasn’t it? You can never turn back!

Weston: What the hell is this?

Balboa: Okay, I’ll put that in my notes.

I LOVE ZOMBIES. Daryl, where you at with your crossbow? Katana, when you come home please bring your Michonne with you k thanks. 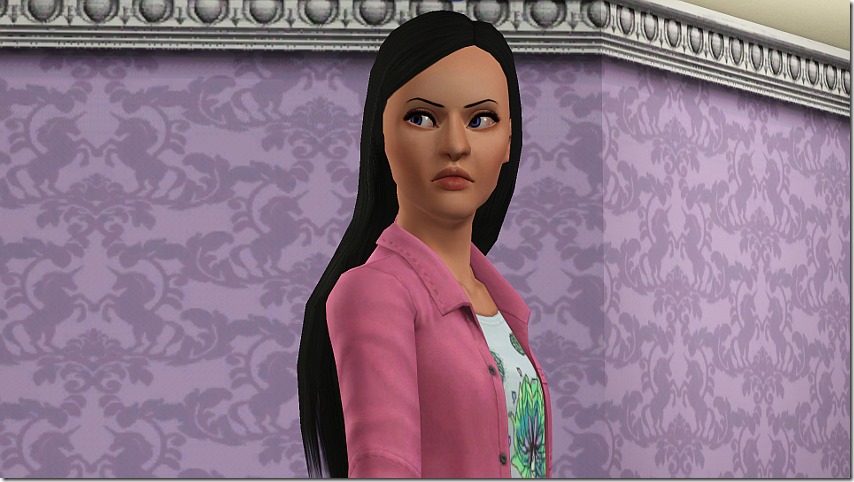 Well, it’s not Michonne, but we were paid a visit by a familiar face! I say “familiar” because “friendly” is pushing it with Auntie Lance’s genes.

Nadia: My mom says this place is stupid.

Your mom dated the stupidest part of this place. 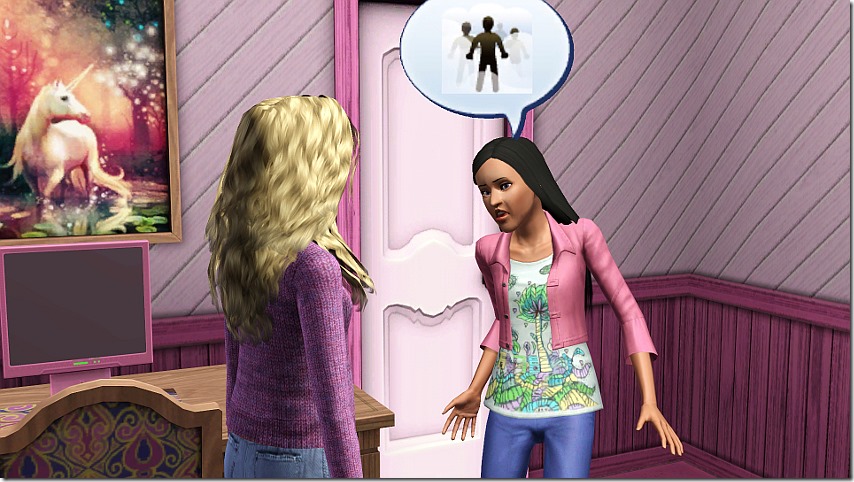 I don’t remember who brought her home, but she picked the most charming of the clan to hang out with.

Nadia: Do you ever get overwhelmed by human existence? Like we’re all lonely souls walking through the fog, just trying to come out the other side?

(The Arts Major gene is strong with this one.) 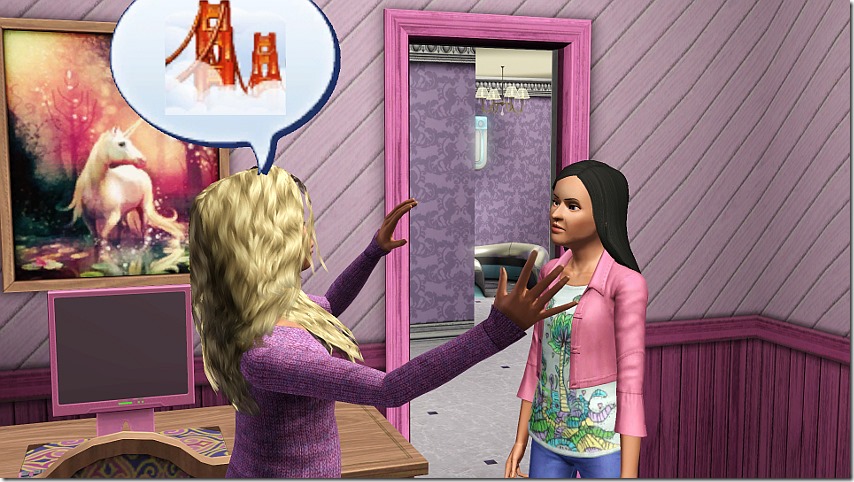 Drachma: Build a bridge and get over it!

You’re not even a zombie anymore.

Florin: Pink is the new green.

Tune in next chapter for more of your favourite loser.

Only Dax’s offspring could out-dumb Zoolander. Maybe just be a toymaker and call it a day?

Lira: What a great idea!

Weston: I’m old. My back hurts.

Yeah, yeah. Go pick up that chunk of metal behind you.

And now it’s time for…

Ceremonial torch-passing desert voyage and sentimental crap out the wazoo!

I don’t think so, Mister! You don’t have that kind of power!

Lira: Last one to the top loses heirship!

*leisurely strolls all around*

Fine, I see how much this means to both of you. 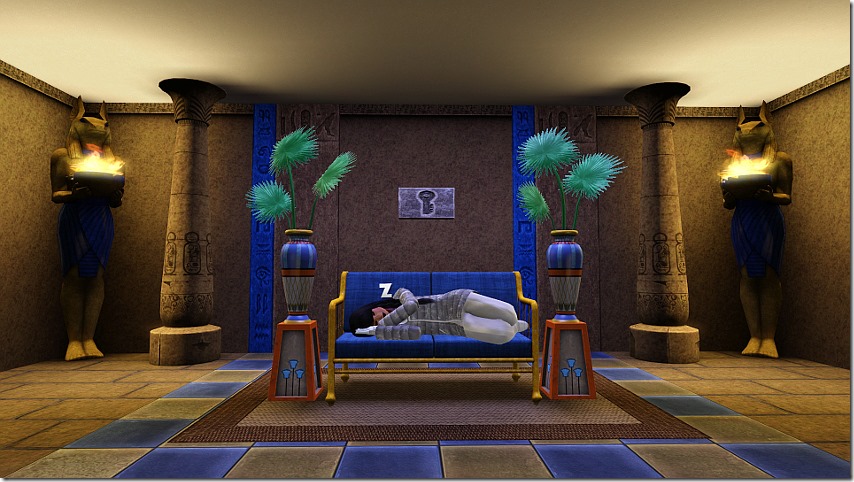 Balboa: You mean until I have cuter kids.

Lira: But serious question, how do you expect to lead a family while jacked up on toxic substances?

Like that’s worse than “jacked up on insanity and hereditary evil.” Please, guys, let’s just accept that YOU ARE BOTH GOING TO FAIL.

Katana: Hey there, Snakey-Wakey! You look nice and poisonous!

KATANA WHAT ARE YOU DOING

Katana: Gimme a kiss! C’mon, just a little one?

Katana: Lol wouldn’t you love it if I died right now?

WHY IS MY ANGST SUCH A JOKE TO YOU?

Much as Katana has trolled me over the past year and a half (I checked) I think I might miss her once these two take the reins.

Lira: I am the ghost of Christmas Past! From now on you will never sleep past seven-thirty! 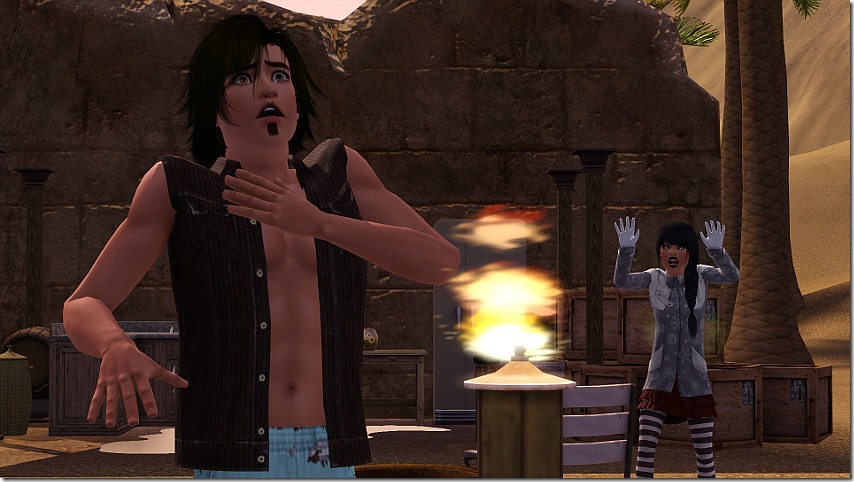 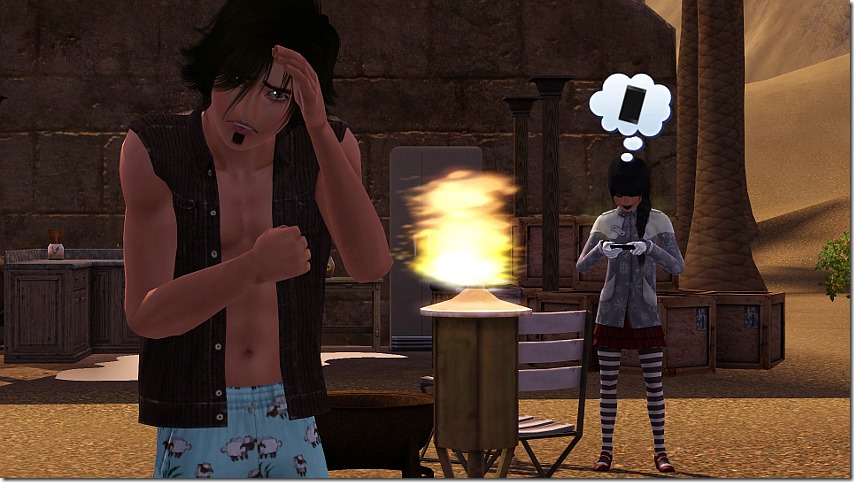 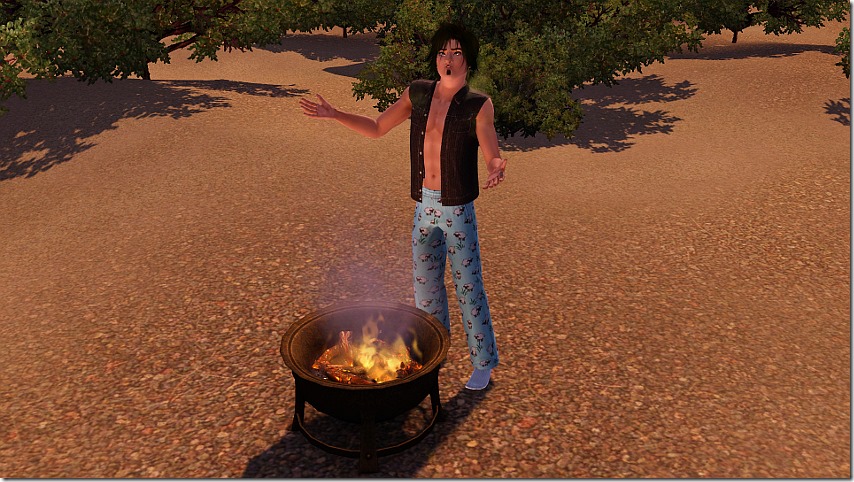 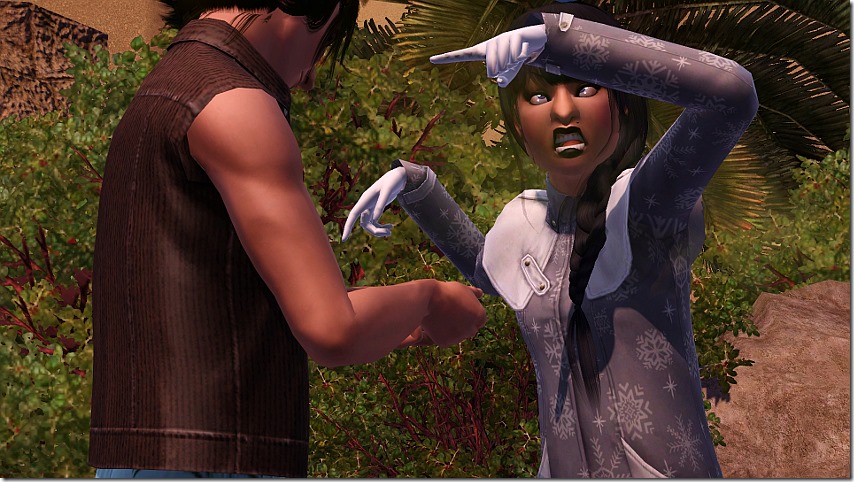 Lira: See, world? See how unfit this bag of volatile human flesh is to rule your legacy? REVEL IN MY POISE AND SWEET DISPOSITION!

Katana: The door just locked. I have no food.

Bonesy: That’s what I said. 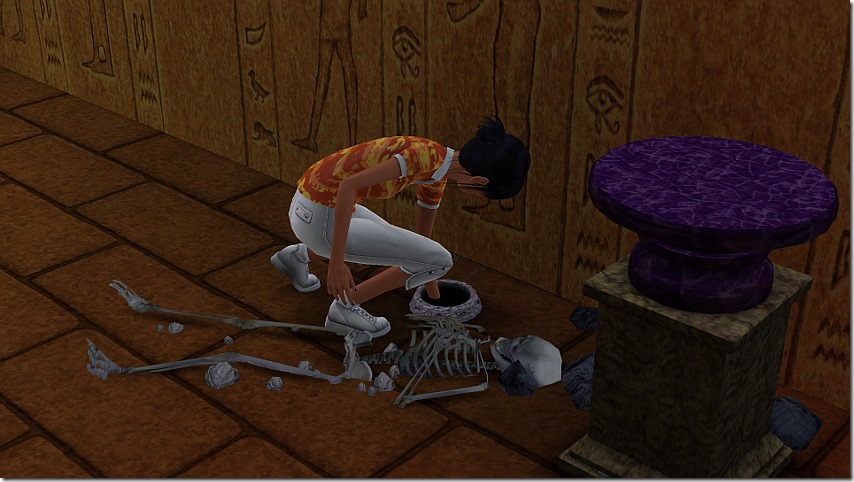 Katana: There must be food in here.

Bonesworth: That’s what I said.

Katana: Oh my god, please let there be magical rain!

Pile of cinders on the ground: That’s what I said. 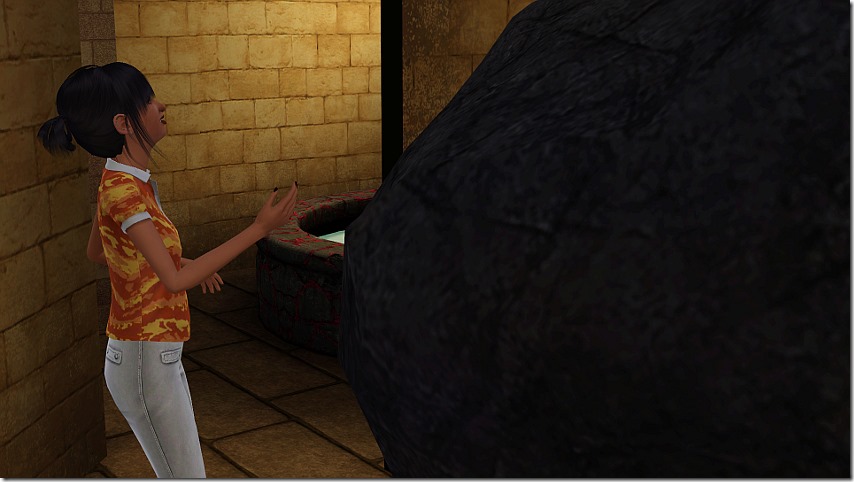 Rock: I do hope you have gotten as wise as you have old.

Katana: Don’t worry, I now have the axe of a plasticine penguin! 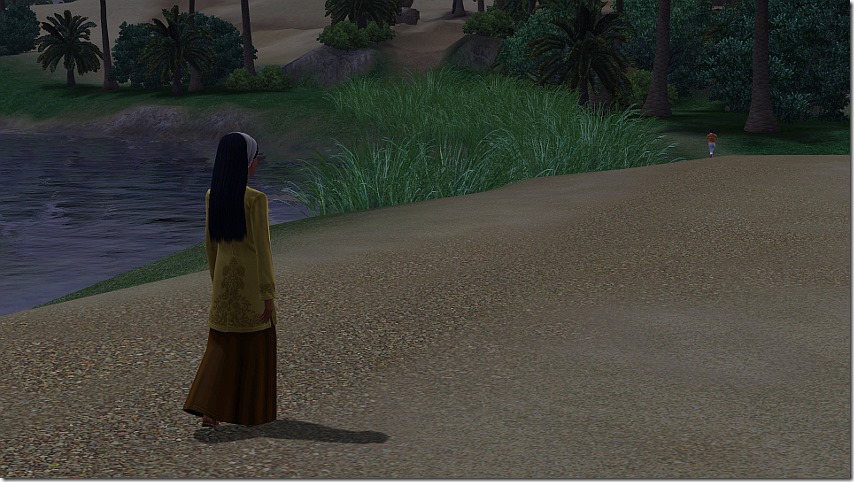 [Voiceover] Katana’s time was running out in more ways than one. As she exited the tomb, anxious to report back on her mission before the country deported her, she was being pursued by the MorcuCorp heiress. [/end voiceover]

Balboa: Sweet, Egyptian Girl just texted me! She says “Where yo mama at.” That sounds kinky!

Lira: My dearest Dippy, let’s enjoy our last moments together, as you disappear without explanation in the chapters to come! 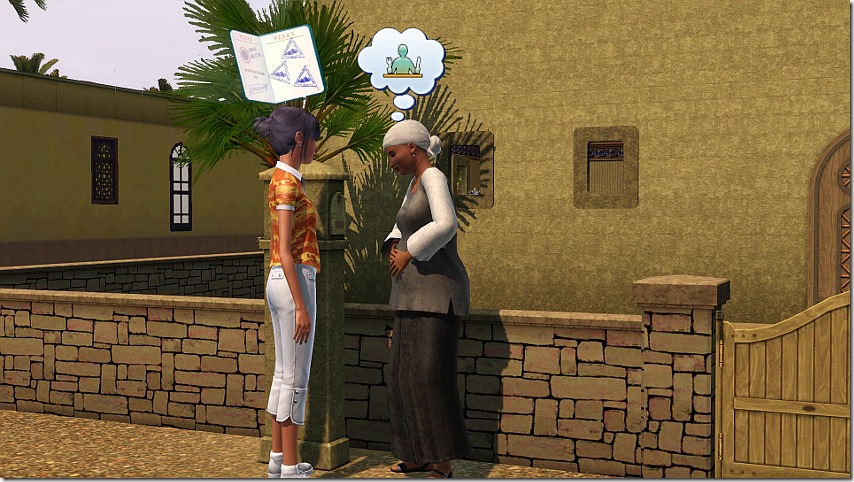 Boa’s cluelessness may have done us a favour this time, because Katana made it to her Mission Master with seconds to spare.

Katana: Give me the points.

Lady: I don’t know, do you think you could go and find me some fo—

Never touching this LTW again if I can help it. 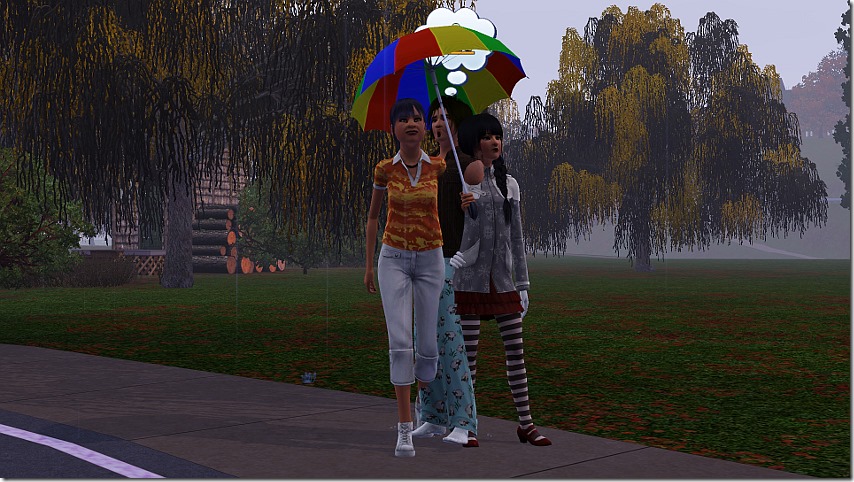 And when they arrived home, the trip had made them closer than ever Katana murdered her two children with a rainbow umbrella.

In today’s edition of “Great Times to Publish a Chapter”: I’m about to head off to the last exam of my university career! No, I haven’t really studied. I’ve been winging it for four years so why change anything now? 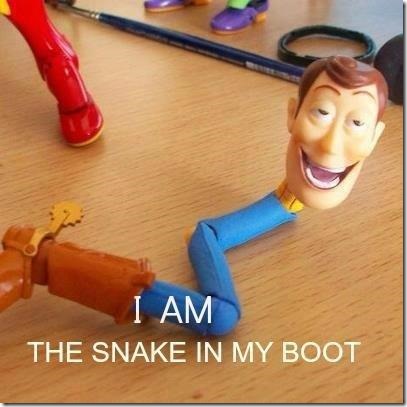