← 4.5 Mrs. White in the Library with the Pipe
Interlude: Welcome to the Enchanted Dollhouse →

Writing this legacy is like walking through mud. The longer it carries on, the slower it goes. This time last generation, Katana was pregnant with Balboa and making a big dent in her LTW. Before that, Razabella were middle-aged with three whelps. And before that, Tewl was… well okay, he was sleeping with his best friend’s girlfriend and being reprimanded by an infant. Maybe my analogy doesn’t work so well but THERE IS DEFINITELY MUD INVOLVED.

Balboa: So Mom, what’s new? I hear you’re a politician now, what’s that like?

Katana: Oh my what a delectable salad let’s dig in shall we

Yes, Katana has found her second calling in the world of politics, but she’s very private about it. And by that I mean she’s been getting promoted without my help… until now. Now I’m on her case about skilling and making friends because the future is bright for this young graduate old cynic! Currently a Yes-Woman trying to climb the ladder. 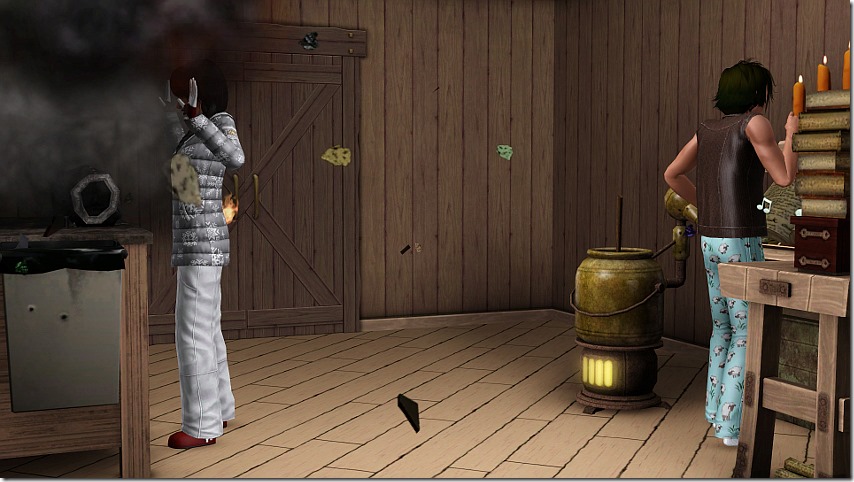 Our heirs are pretty dedicated too, but you don’t have much choice when you’re locked in a shed. They’ve spent so many hours in here together that they have a whole system worked out. 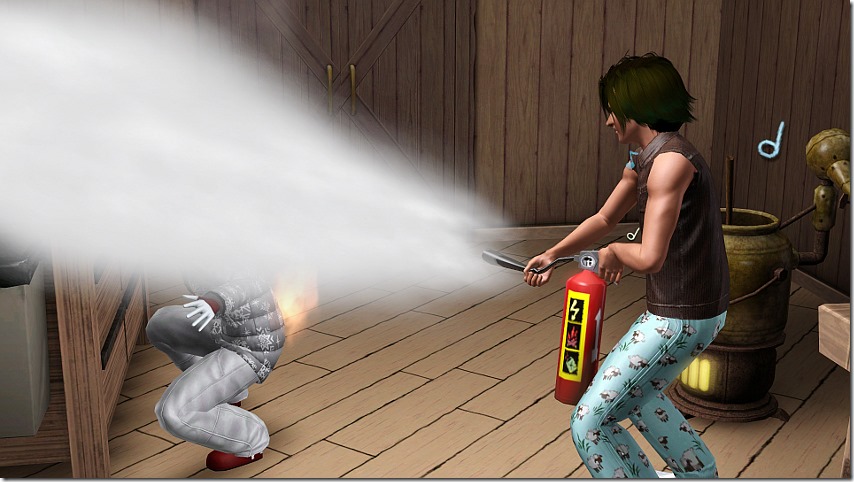 Boa: Wait, are you enjoying this?!

Lira: I wonder when he’ll realize porcelain is inflammable… 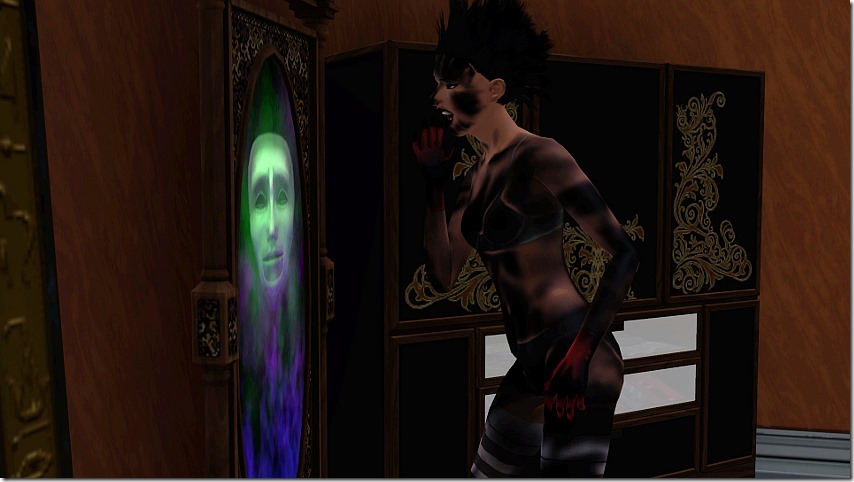 When I occasionally unchain the doors, it’s business as usual. Boa stumbles around like an idiot and Lira conspires with the furniture to dispose of Weston. The poor bastard looks terrified. 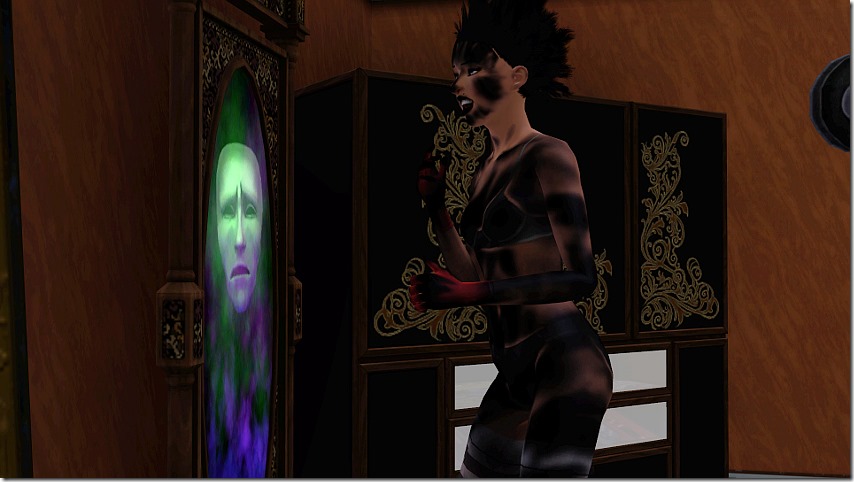 Lira: And then he’ll choke and die at his own daughters’ birthday party! How brilliant am I? 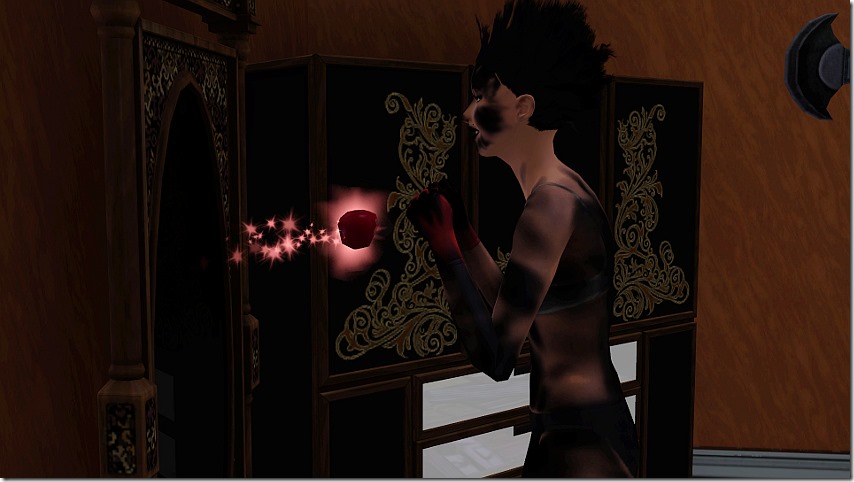 Mirror: Fine. Here. But I want no part in this. 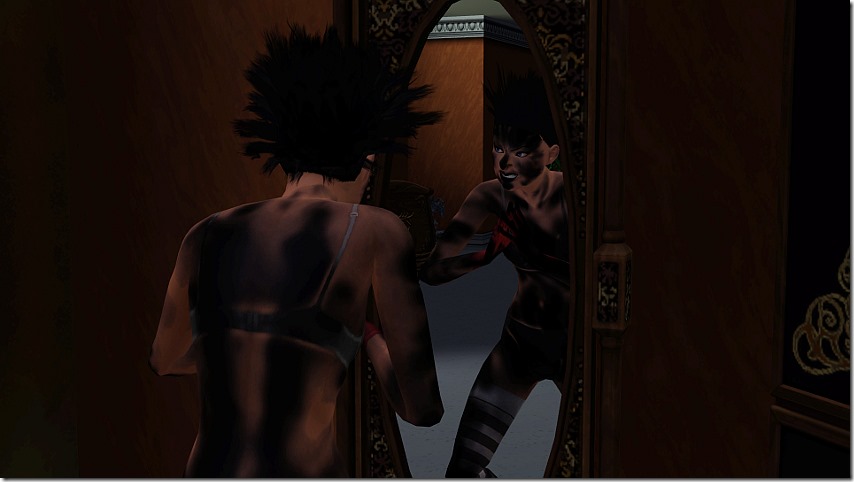 I regret so many things about this picture.

Guess who else is about to regret stuff!

Ine Zhahvajjevoo: What do we have here, Pokédex? A planet called Earth, known for life forms of elevated intelligence…

Lira: We have chemistry, yes?

Ine: Whoa, lady, we barely even—

Lira: I choose you to father my children!

Lira: Oh well, plenty more aliens in the sky and all that.

I sometimes feel bad helping Lira to kill Weston, because Katana seems quite fond of him and I could never betray her. She does this shit autonomously. Still, I’m never sure with Katana whether she forms real human connections or if she just has a Santana Lopez complex…

Then again, considering how that turned out, maybe not the best comparison. ANALOGY FAIL #2.

Lira: Mama, I’ve been thinking my first major decision as heiress should be a really stupid one. I’ve decided we should all go to university. 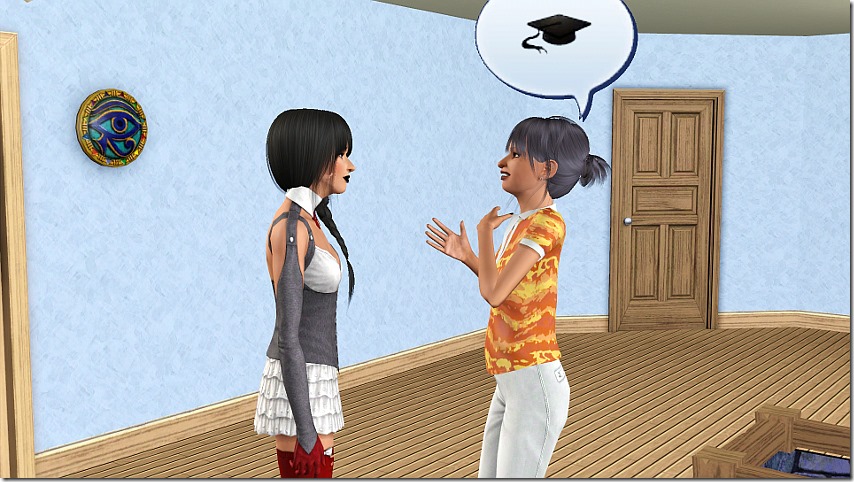 Katana: After all, academia runs in the family!

In truth, I was feeling a little sentimental about the spares. Katana has had the limelight for a long, long time and they haven’t all had the chance to exhibit their fine qualities.

Florin: As life runs trickles slowly down a glass funnel, how is it that the sands of time quench the flame of desire? Why am I wearing a necklace made of breakfast, and why does that almost rhyme?

On second thought, I’m done with him. He can go narrate Days of Our Lives.

Party time! And look who came back for another taste of the Langurds!

Ine: I heard they go well with cheese.

Sammy, look! I knew you were bound to show up soon. 😀

Tommy: We meet again, Lancelot. Did you do something with your hair? 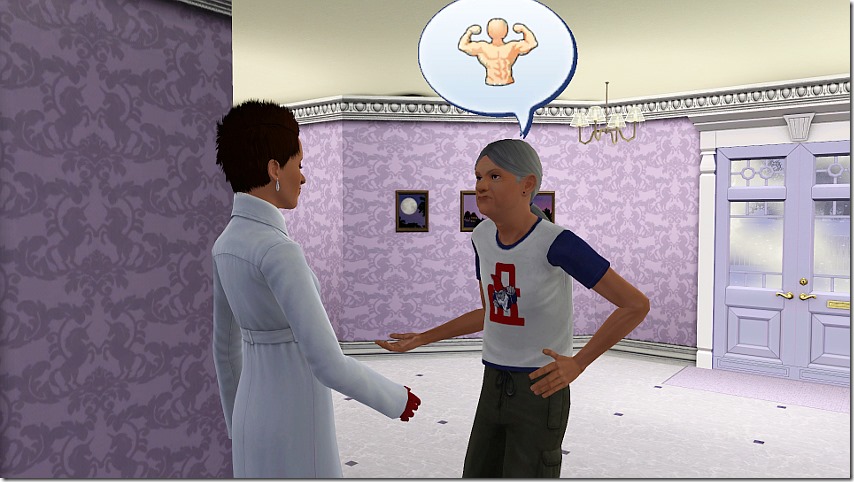 Lance: I bet we could still beat up Katana. 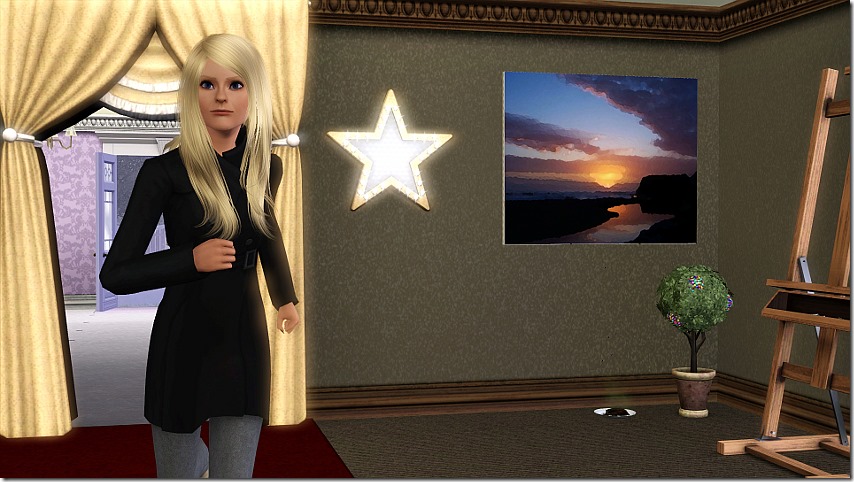 But wait! Don’t forget about Annoying Baby Sibling #3 — she probably wants in on the action, too. 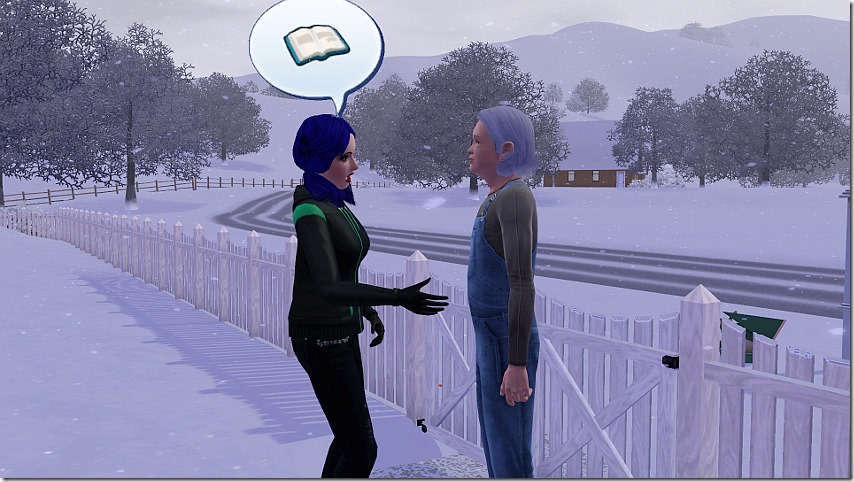 Sammy: I’m not sure how to put it, but I feel like someone should tell you… You’re in the process of being written out.

Somebody wasn’t very happy about Katana’s foreign party guest. Actually neither am I, given that she’s flaunting the Store content I JUST bought and was saving until next chapter. 😡 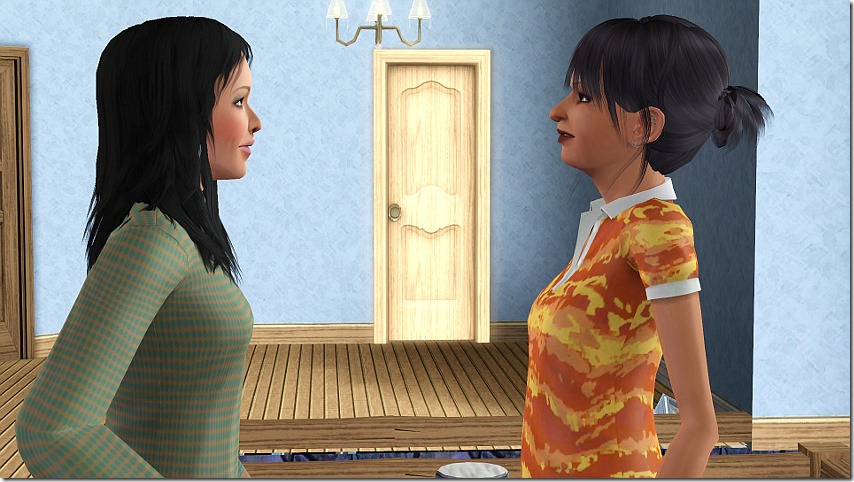 But can I tell you a secret? I actually ship Suntana the most.

Sun: Remember when we skinny dipped and you drowned?

Martyr that she is, Lev spent the party holed up in the office “working from home.”

Lev: He tore off his shirt in frustration to reveal a chiselled eight-pack. “Don’t you see, Lavender? You’re the only woman for me.” Thunder echoed in the darkened hills as he leaned in to—

Uh, Lev? You work at a grocery store?

Lev: This is the only shot at romance I’ll get! I have to live vicariously or not at all! *sob* 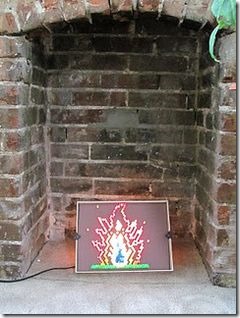 I don’t remember if it’s actually Christmas or if I forgot to take the stockings down from when it was.

That’s because all our parties look the same. Minimal preparation, lousy socialization, and that one sim that everyone’s hating on for some reason.

Sun: Boooo, I have leg hair that’s scarier than you!

Katana: I will never let a ginger marry my son!

Drachma: Ooh, this is good. 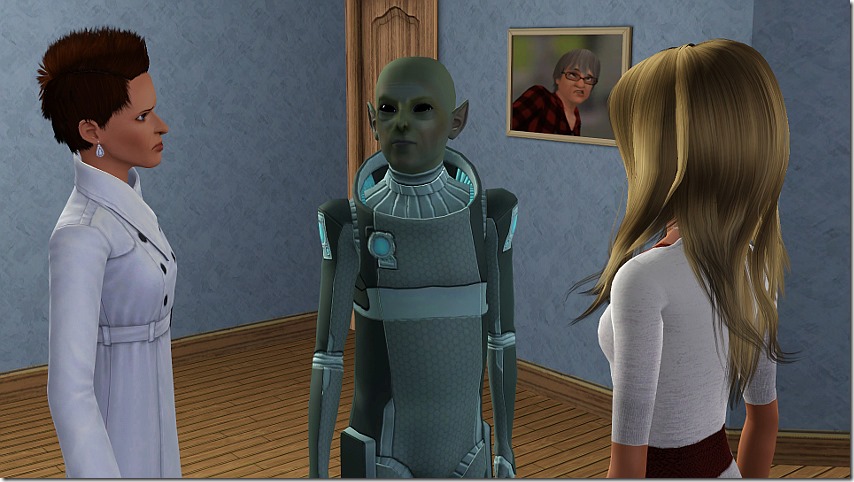 Azula: Really, Lance, I can’t believe you had a thing for that freak. Did you actually kiss his derpy face?

Azula: Aw sheesh, I was talking about Dax. 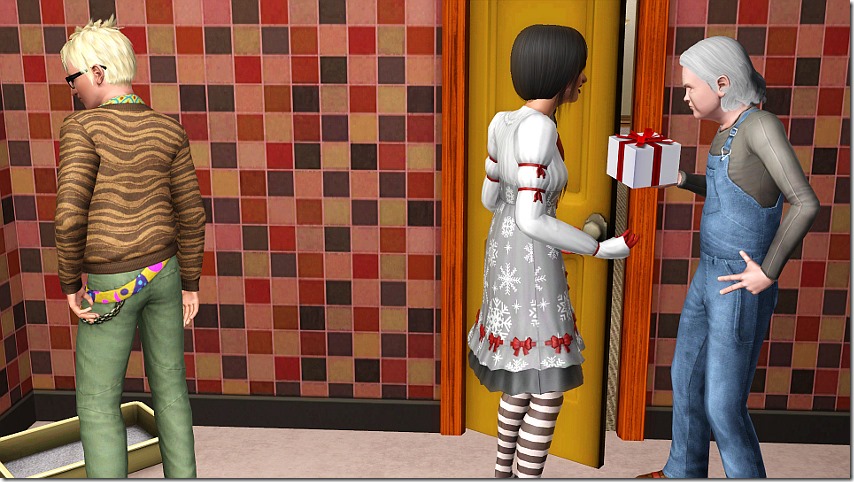 Hands off the pants, Florin. You’re not drunk enough to use that as a toilet.

Florin: But I had a whole beer!

Lira: Happy Birthday, Stepfather! I got you a… special treat…

Weston: It’s not my birthday.

Hide the bait in plain sight, of course.

Witness the last guest leaving before the “festivities” have even begun. 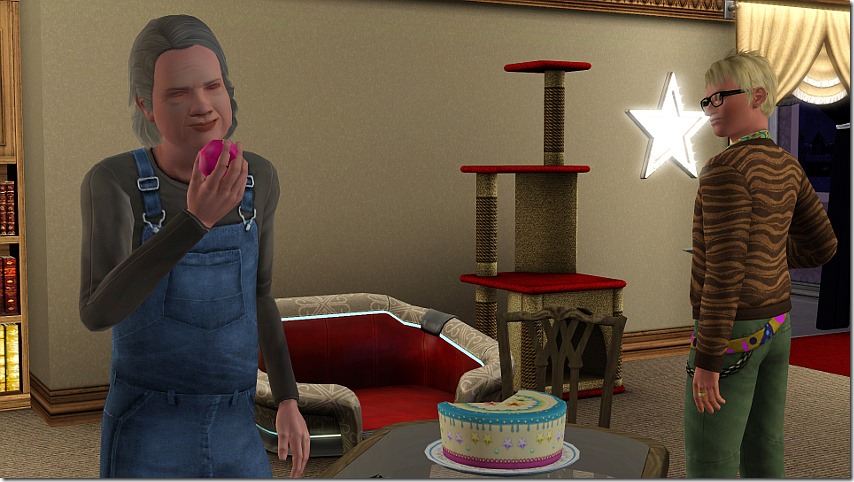 Florin: Hey Weston I wouldn’t eat that, Lira said something about mur… meh, whatever. 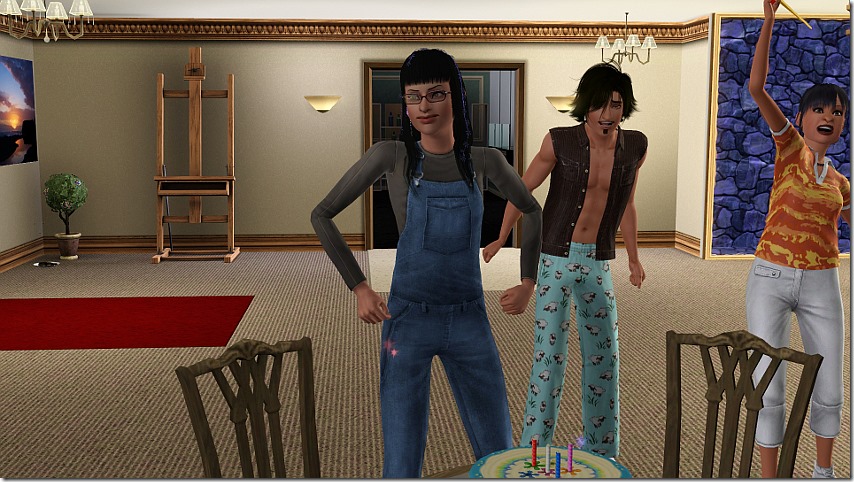 Sadly not the tragedy it might’ve been, since EA’s “poison apple” is as a Disneyfied hoax and only turned him into a Sleeping Beauty.

Weston: I know you, I walked with you once upon a dream…

Lev: My life is the worst.

Lira would be the only one to find the cake.

Rally the troops, we’ve got another one yet to go!

Drachma: And I smell like one too. Hooray, whoopee, let me at the cake now please.

Birthday notes—Lev rolled Avant-Garde and Drachma picked up Dog Person just to spite me. So to spite her, I picked “Perfect Student” for her LTW.

Then everyone got their cake and was quiet and happy, like a bunch of toddlers, until the next minor upset would causa a— hold up, who the fuck is this?

And you came from where?

NOT what I was asking… but since you’re a cousin, I guess you can stay for cake. 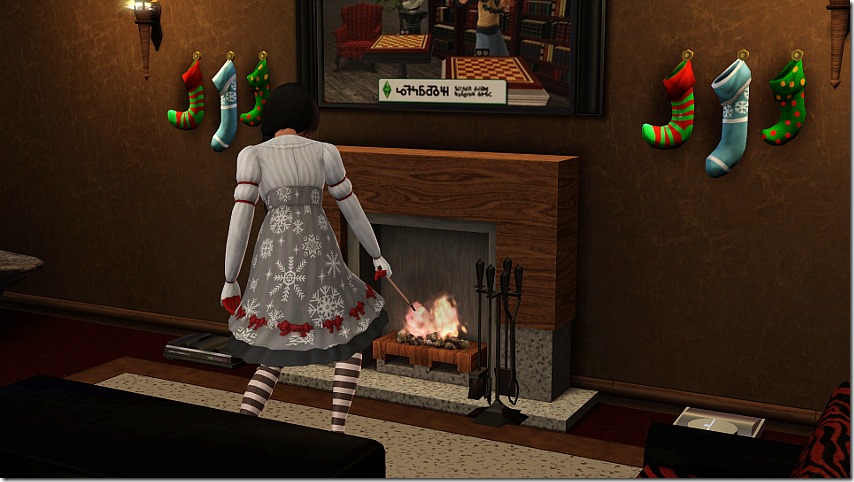 WE GET IT Lira, stop giving yourself away! 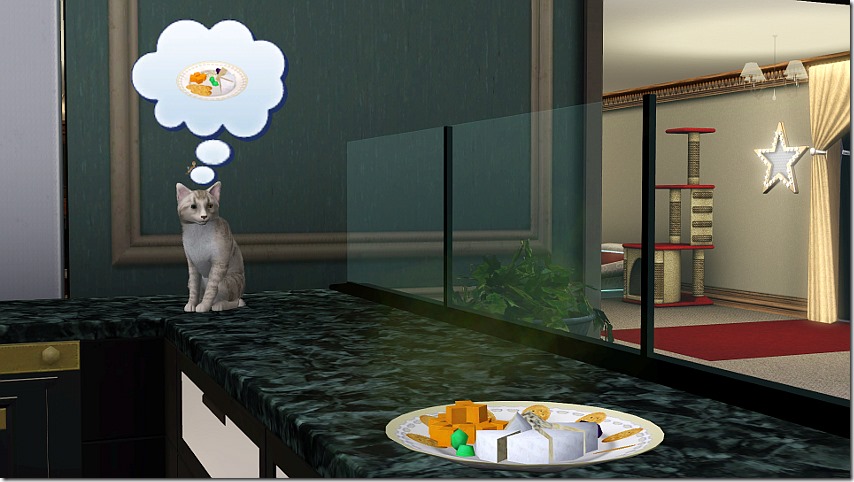 Oh right, Zorba’s still here. I mean, not that anyone forgot to discipline her, or love her, or feed her…

Zorba: Seeing as I’m invisible and all, I guess y’all woudn’t mind if I snarfed these stinky cheeses. 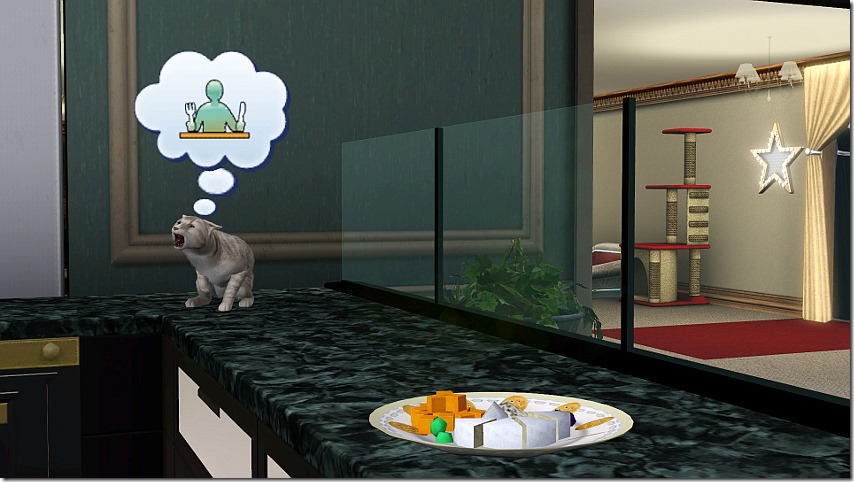 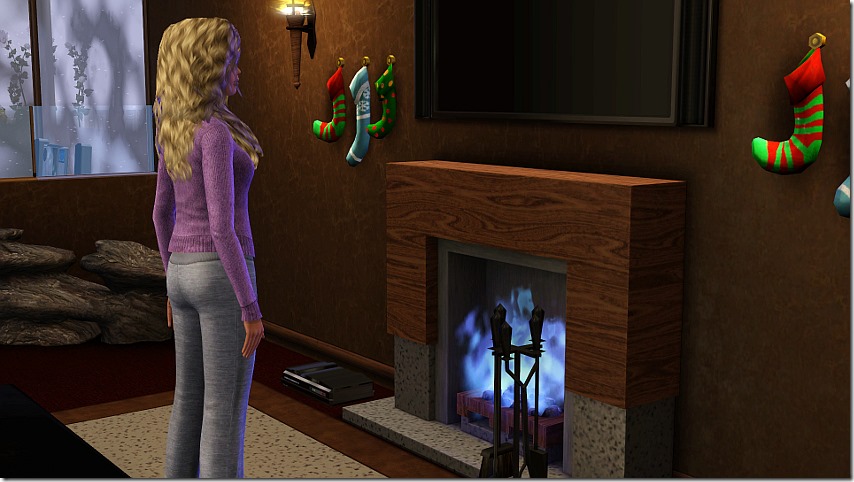 Drachma: I could… or I could turn the fire blue.

I can’t even blame her anymore since she’s officially a traitor to the League of Feline Fanatics. However, animal neglect is a travesty either way.

Chyeah, okay. We all know it’s not a big family affair once it rolls around to the youngest.

Zorba: HALLELUJAH. What took you so long?

The family returned two graduates stronger and one cat weaker.

Weston: We should get a dragon next!

Why, so we can watch THAT get loaded into a van? 😥 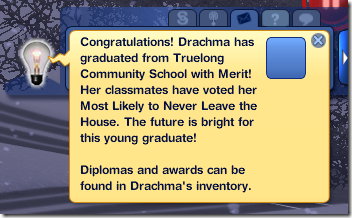 Well, she wasn’t bothered showing up in the picture, so… 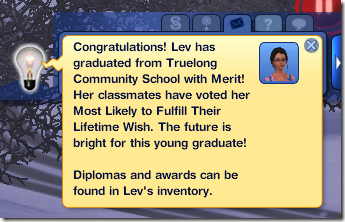 It’s a good thing Lev has a manageable lifetime wish — not like “find your true love” or “chase the rainbows” or anything. Ain’t nobody got time for that shit. 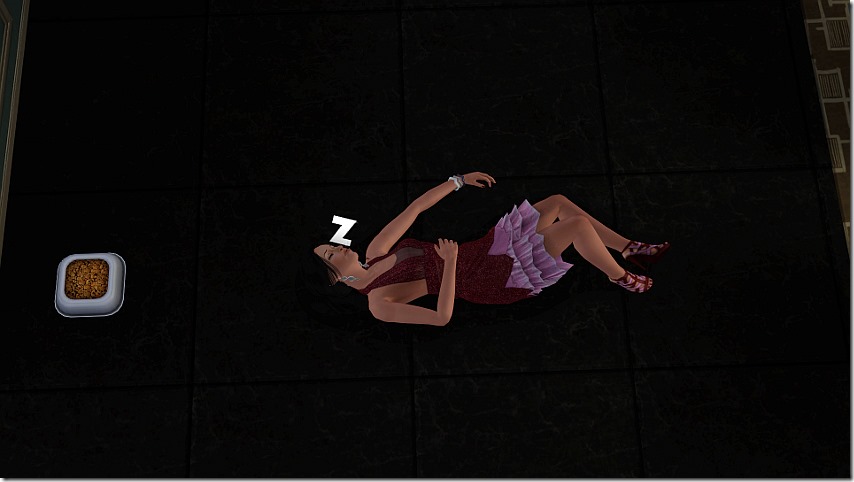 Aaaaand the weight of her lonely future came crashing down.

Lev: That’s it, I can’t hold this family together anymore.

Which, naturally, means everything falls to shit. Immediately.

Katana: Thanks a lot, Lev!

Yes, Langurds. This is a textbook example of how to act in an emergency.

Lira: I’m not in an emergency, I’m in a coffee table!

Everyone: Lev, do something!

Lev: So tired of your shit, guys! I can’t do everything all the time! 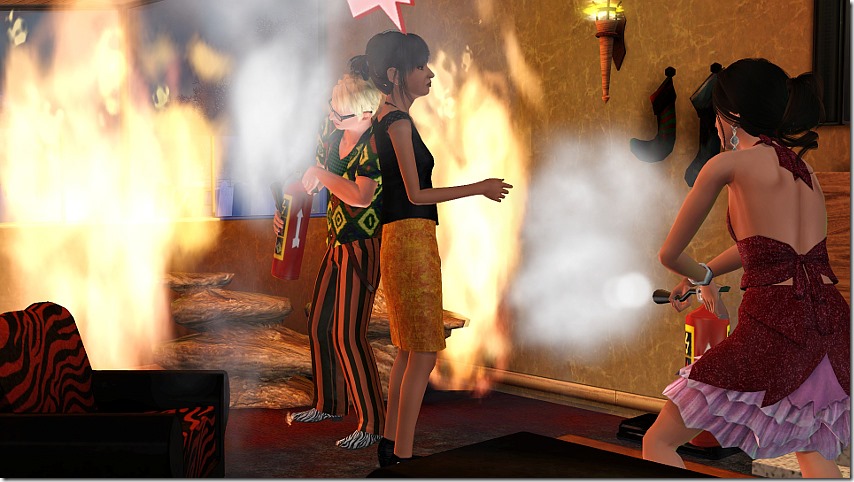 Lev: Fine! If that’s how it’s going to be… Goodbye, everyone! See how you get along without me!

Katana: That still counts as a protest!

Crap crap crap. Whose idea was it to build a fire room, again?

Drachma: Mom, what do we do?

Lira: Oh my a fire

Katana: I have raised you all so well. 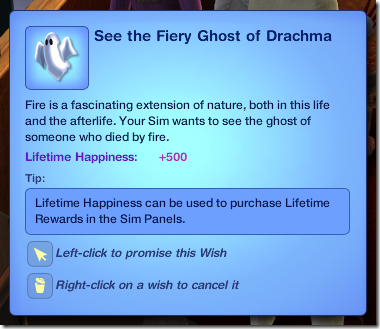 No kidding, when they all (and I mean Lira) apparently want each other dead. :S

Not gonna lie, I was pretty terrified. (So was the carpet.) If you study the pictures closely, you’ll see that we came quite close to losing Lev and far more importantly, Katana! I know she’s close to the end anyway, but no casual living room fire is gonna claim the king of my legacy. However, nobody died and we got some money for the carpet and then everyone (and I mean Weston) got the chance to mourn Zorba. 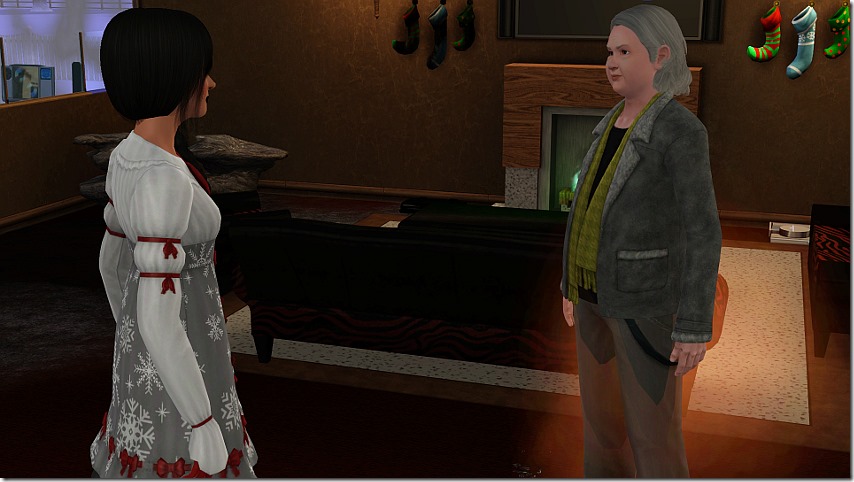 Lira: Why don’t you go cry into a pie, lardbutt?

Talk about a bad time to bring up personal drama. 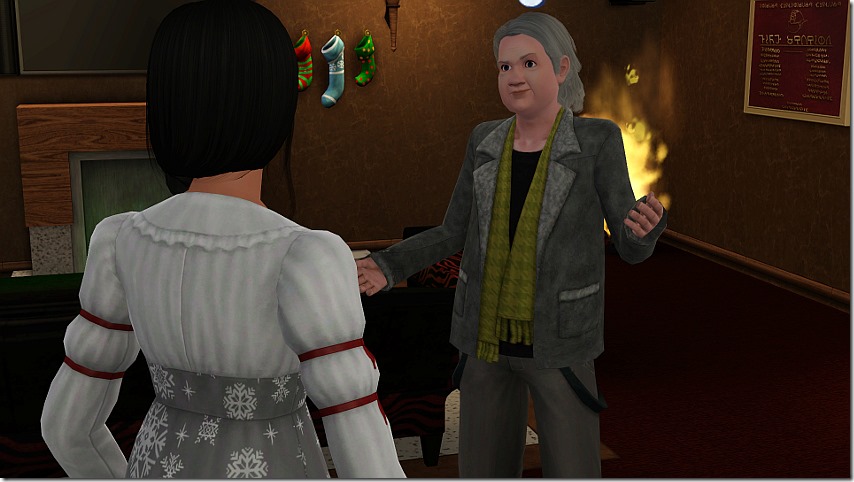 Lev: Ha! Have fun being FAT!

Weston: Actually, of all the things you’ve done to me, this one’s not so bad.

WHAT THE HELL GUYS

DID NOBODY THINK TO TURN OFF THE FIREPLACE

LANCE WHERE DID YOU COME FROM

Katana: I don’t understand! This room is the definition of safety!

Lev: That’s it. Time to make some changes around here.

Lev: Let’s review your accomplishments, Boa. Since you took over, you’ve lost a cat and nearly burnt us all to rubble.

Lev: Psssht, some heir you are! Clearly can’t be trusted to make the right decisions for this family!

And so, under Lev’s tyrannical command, this is what the family left behind.

Meanwhile, Lira sat in the back seat, cackling into her gag…

So long, House of the Elements! We had some good times, but as expected, winter made you laggy and I lost my patience. Seriously, I don’t know how anybody manages to finish their whole legacy on the same lot or even in the same save file. This game seems to write over glitches with other glitches until they form a giant tower of illegible garbage threatening to topple over at any second.

Also, I have big plans for the family’s next destination so the move isn’t entirely a practical one. (Y) Stay tuned to see where we’re headed!

← 4.5 Mrs. White in the Library with the Pipe
Interlude: Welcome to the Enchanted Dollhouse →