The Ultimate Showdown (of Ultimate Destiny)

So the heir poll closed on Tuesday, but we have a slight problem.

These were the original results:

But then I found out that FluffyMao and Echoweaver, two regular readers, never got the chance to vote. Given that I stupidly ran the poll for five days instead of my usual seven, I decided to factor in their votes by comment. Which, BY ALL LOGIC, shouldn’t have swayed the results enough to be an issue, but then they both voted for Crash and this happened…

Calamity: Why you gotta make this hard? I had that poll in the bag!

She really did. No one could touch her for about four days, and Crash was so unpopular that I actually felt sorry for him. And then the little dark horse blindsided me by getting like five votes in one day.

So I think the fairest way to settle this is with a one-on-one fight to the death revote. I will mention that I have a preference at this point, and I’m reserving the right to override the result like the gracious dictator I am. But I would genuinely like to know who the ultimate favourite is (plus I’m out of simming range for the next few days so I have time to kill anyway).

So, once again, here are your spiceberry-loving candidates: 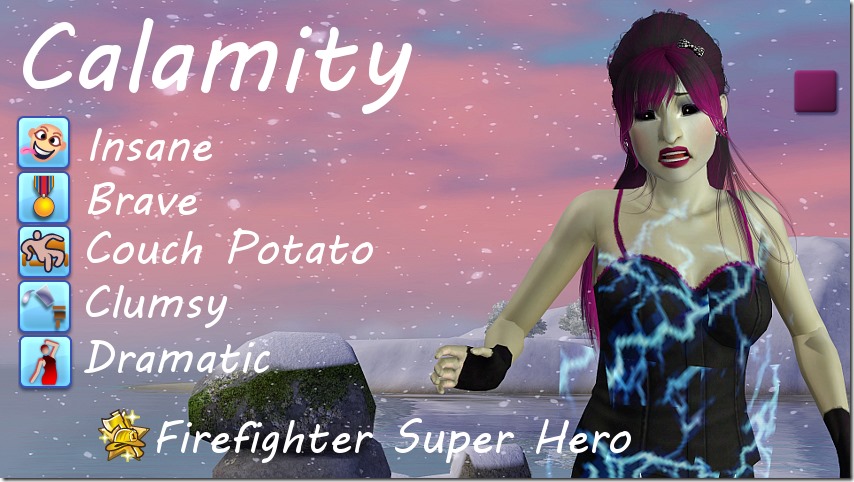 Pros: I doubt I’ve ever played a sim with such a great collection of traits. I’ve never done this LTW before, and she’s the perfectly imperfect candidate. I also have a sweet naming scheme planned for her kids if she wins.

Cons: Let’s face it (ha ha) we’ve seen that mug for a few generations now, and the (mostly) black hair for even longer. Variety is not her strong suit, even though her colouring does a lot for her.

Pros: He’s an adorable little weirdo who pretty much epitomizes the Langurd name. Plus he’s the only kid who got the much-desired white hair, and he has a great sense of fashion.

Cons: Technically, he is a face clone of Frieda. His LTW isn’t exactly cinematic. Also, I really like writing dialogue and he doesn’t offer much in that department.

Here’s a direct link for anyone who can’t see the poll!

I’m keeping it up until Sunday night (11:59pm Eastern Time) so get your vote in while you can! Dreadfully sorry to make you do this all over again, but it’s just such a life-altering decision, you see. 😛

Posted on May 5, 2016, in Uncategorized. Bookmark the permalink. 26 Comments.