In my haze of exhaustion last night, I completely failed to acknowledge a feat I have not accomplished since Chapter 1.3: two legit updates in one day! Universally recognized as the first sign of the apocalypse, so start hoarding those cans. Given that in Tewl’s day my average post length was a weak 40-45 screenshots, I think I get to claim victory over myself here.

To celebrate that victory, and because everyone begs for this shit on Leisure Day, the Langurds are opening up their glorious yard for entertaining! 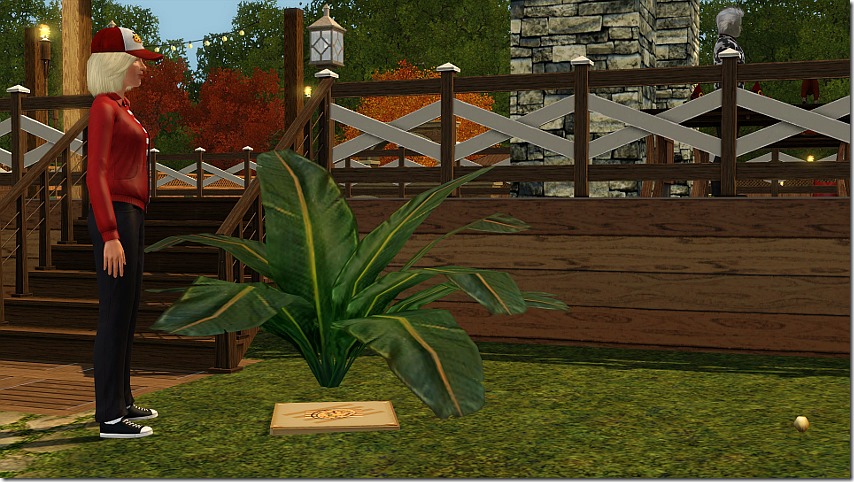 Like any good party, this one begins with a fumbled pizza delivery.

Pizza Girl: Tada! Did some ants order a pizza?

END_OF_DOCUMENT_TOKEN_TO_BE_REPLACED

ALMOST THERE, GUYS! I’ve been sorting my screenshots and this should be approximately the third-to-last chapter of Generation Three. Then I get to throw out an heir poll and let you do my dirty work for me. ‘Til then, it’s Langurds all day err’day. Well, that and scanning all day err’day. My nostrils are haunted by the scent of centuries-old onionskin paper and I want to type “.pdf” at the end of every sentence. Somebody help me.pdf

What was I just saying about how I wanted more Tewl visits?

Tewl: But I’m bein’ all scholarly an’ shit!

END_OF_DOCUMENT_TOKEN_TO_BE_REPLACED

2.8 Journey to the Fire Nation

Hell yes, that’s an Avatar reference. My brother has me back in the habit of watching morning cartoons, so I’ve been getting through two episodes on Netflix every day while I eat my dinosaur egg oatmeal.

I’m off to teach kids how to play Quidditch in an hour or so, but we’ll see how much of this I can get through in the meantime.

(My life isn’t always this awesome, I swear.)

Looks like these losers have been living it up pretty good, too. Lots of slacking off and childish games and shit.

Tommy: Dad, we’ve been at this all day. Can I please go to bed now?

Razor: No, son. I must train hard if I wish to be a martial arts master. And, uh, you may have to help me uncrick my neck.

END_OF_DOCUMENT_TOKEN_TO_BE_REPLACED

This is coming to you from a retirement village where I am currently hijacking the wi-fi of an unsuspecting elderly couple. Never have I been so proud of myself.

Before I start this update, I thought I’d share some of my adventures in the Land of Distraction. For starters, I had promised myself that I could start building the new legacy house after Chapter Five. The current one, with its artsy glass corridors and towers, was having a lot of routing problems and anyway, it’s just ugly. So I told myself: “Let’s make a nice, simple family home that won’t lag my game or generate foot-tapping vortexes to entrap my sims forever.” With that in mind, I opened up 15 Summer Hill Court in another save file…

…and built a house so elaborate and expensive that it blew the Langurd budget by more than $100,000.

I have a problem.

Anyway, I don’t want to unveil it just yet (too much awesomeness for one chapter, I fear) but I did let my simself take an abbreviated tour, so here are some snippets of that: 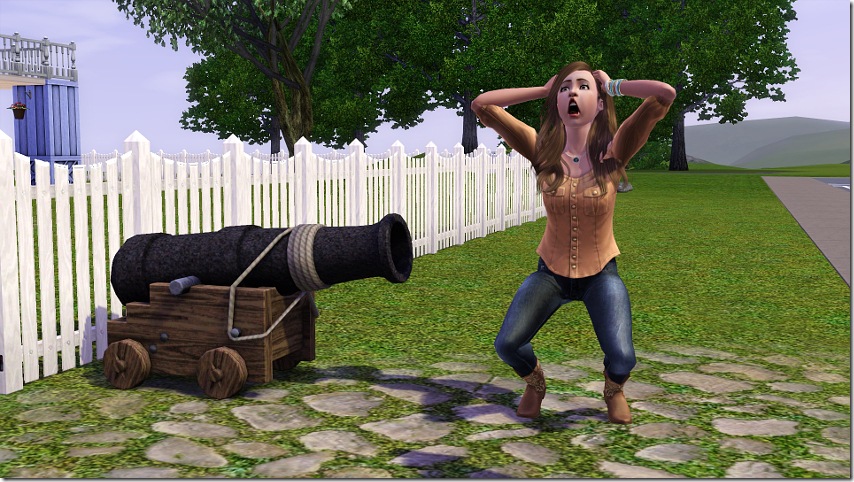 Far Inferior Version of Myself: THERE’S A CANNON. WHY IS THERE A CANNON?

In case Gurbin comes back, obviously. But never mind that! Step inside the newest Casa de Langurd, featuring…

END_OF_DOCUMENT_TOKEN_TO_BE_REPLACED

No. This will not do. I’ve had this chapter half-written for like a year but school is bent on keeping it unfinished. The proof is in the pudding, with the pudding being that this chapter’s title is the name of one of my textbooks (with some minor alterations, obviously). Basically I’m in the middle of the worst semester EVER and am currently taking courses in three different languages which is screwing with my mind so dites-moi si je commence à écrire en français oððe on Eald Engliscgereord, si? Derrr, my brain is so fried. Time for Langurds. Because ain’t that the best remedy for a broken intellect.

Now for a SUPERSPEED RECAP because these things are boring as heck! The family was broke so the kids went on a dough-raking mission but failed; Morgana wanted to reconcile with Tewl but he rejected her because he’s douche; Star had an affair with the babysitter; Tewl got his ninth girlfriend but turned her into his sparring buddy; and I forced everyone in the household to be friends so that I didn’t have to invest in more beds. I think that about sums it up – now let’s get cracking on the next one! 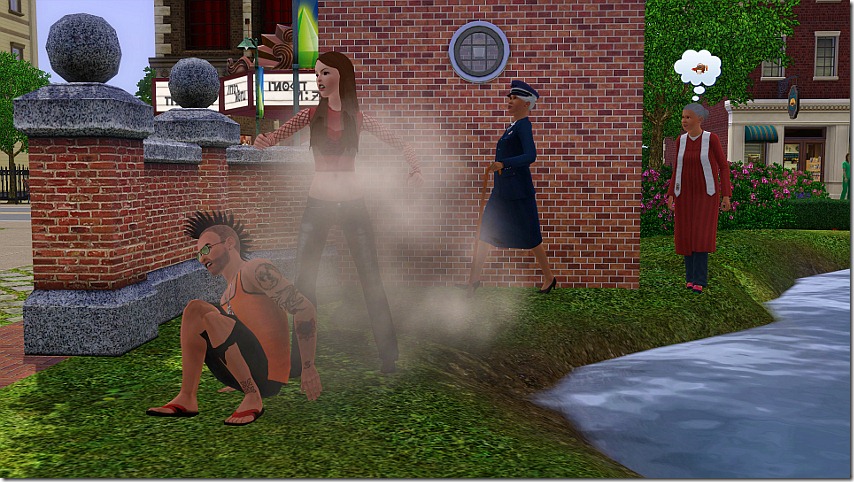 We all know what happens when Tewl gets into fights with girls (or anyone, really) so this screenshot is less for plot development and more for the public humiliation of one legacy founder.

Sandi: Take that, bastard! That’ll teach you to beat up a scrawny-ass punk chick with zero percent muscle mass!

Erin: Well, I’m glad I never got involved with that pansy.

Jocasta: Few sandwiches short of a picnic there, Erin? Ooooh, snap. That’s way better than the last caption you wrote for this thought bubble.

END_OF_DOCUMENT_TOKEN_TO_BE_REPLACED

Hello again! After a crazy weekend at work, I now have three glorious days of freedom. And guess what that means? More Langurds, of course! Because that’s what everyone wants in life.

Last time, Morgana gave birth to triplets Ripper, Rotter, and Razor, the first of our eligible Generation Two children. Tuesday went into labour, but the chapter was getting tediously long so I left her hanging like the gracious creator I am. 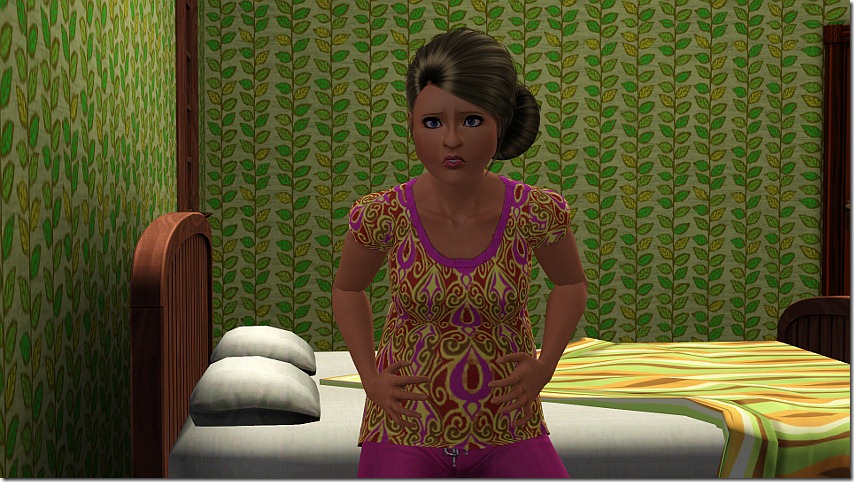 Tuesday: Get to it already, will you? I’ve been in labour for sixty-five hours, thank you very much!

Alright, alright. Off to the hospital you go.

END_OF_DOCUMENT_TOKEN_TO_BE_REPLACED

Hey guys, Sam here. I know it’s been a while since my last update, and I’m hoping to get started on some captioning soon. But right now I have a few in-game kinks to iron out that are driving me BONKERS.