6.8 No Sugar Tonight in My Coffee

Round of applause for Gryffindork tanking her self-imposed mission in less than 48 hours. It’s not my fault, guys. Failure radiates from my very being. My friend asked me to look after her betta fish this week, and he literally died on my watch.

But in the words of a misguided Death Eater (and a really dated reference), IT’S NOT OVER YET! This seven-posts-in-a-week thing can still be a thing. I’ll just have to double up one day, which is totally doable. /delusion

Last time, a trilogy of Ghost Crises caused all sorts of rule breaking and left me wishing for several plates of ambrosia, which I then remembered is also against the rules. Basically, things are going great and everyone is really happy.

A fine time to check in with the one who started it all.

Tewl: Lemme get a gud look at you, punk.

A sign of progress if there ever was one.

And here’s our latest sign of progress, Trance the $5,000 nooboo. After all that hassle, I’m beginning to realize that having 7th-gen Langurds in the house is pretty exciting. As is the fact that Cal may be the first heiress to actually like her kids.

Cal: You get bonus points for not destroying my lady parts.

I guess what I call “hassle” she calls “10 extra hours of sleep.” Silver linings, right?

It’s really too bad that I get to dictate her priorities.

Calamity: Yeah, but the F12 key is falling off this keyboard.

A few of you have expressed an appreciation for Crash the Swole and his picturesque tendencies. Please enjoy this compilation I have been stockpiling of him autonomously testing out various sitting areas.

I think he’s been trying to educate me on proper lighting.

No one has expressed an appreciation for Omen, but here he is anyway.

Omen: Oh wow, small world! What are you guys doing at Quinn’s house? 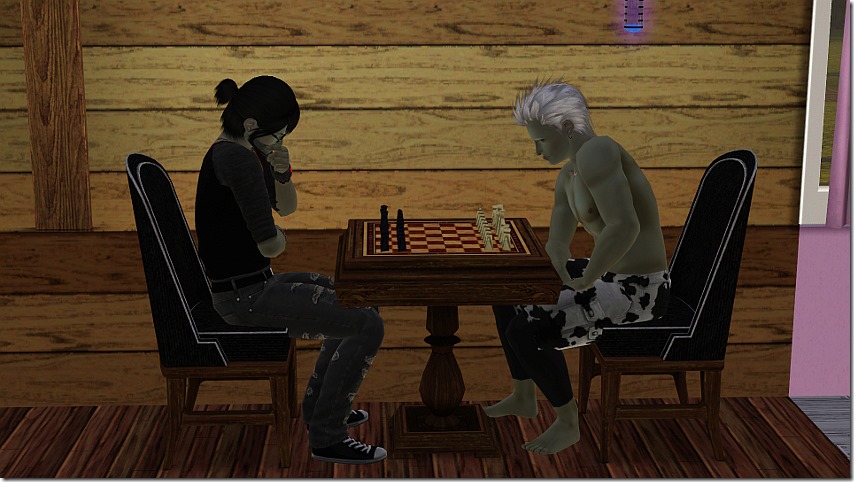 I don’t know if sims gain Logic faster from playing chess against an actual opponent or if I just wanted a nice brotherly picture, but DAYUM look at those muscles, and what were we talking about again?

Omen: I think you’re being objectified.

Omen: It could be worse. You could be Fiasco.

Apparently today is Keeping Up with Extended Family Day, because my notes say Cal is talking to Skydancer.

Cal: Oh, not much new here. Had two kids. Mom died. Still haven’t actually rescued anyone from a fire.

Chef on TV: Rescue me, bitch.

And Rhapsody has just met (and instantly clashed with) her first cousin once removed. Yes, I drew a chart to figure that out.

Rhapsody: I’ve heard of your clan.

Molly: That’s weird, I haven’t heard of yours. 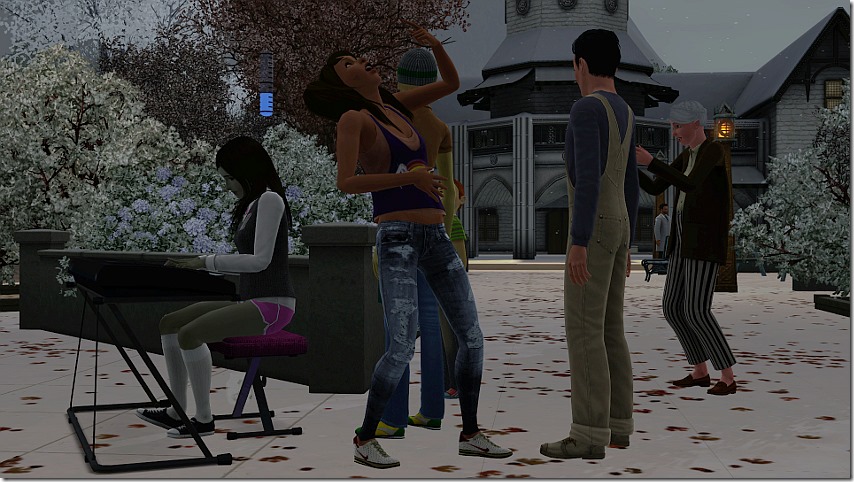 As it turns out, Molly’s probably just hangry. That or her jeans are too tight.

Molly: Both, you can’t put snacks in fake pockets!

Quinn doesn’t have any extended family, but he still wants to join in the fun.

Aww hell no Flanagan, you get rid of that sprightly young speech bubble right now!

On that note, his sprightly young wife celebrates our first ever adult ghost birthday by staring morosely at her reflection. 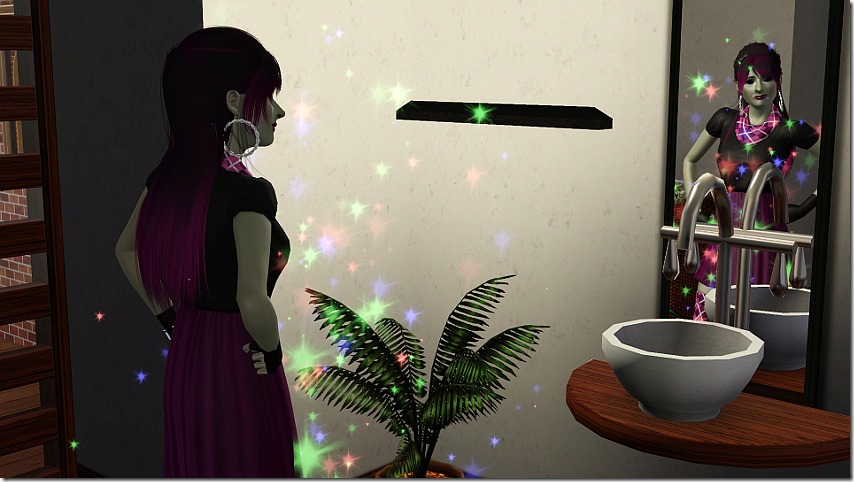 That’s because three wrinkles don’t mark the end of your life.

Cal: Still, I think I’ll have a midlife crisis. 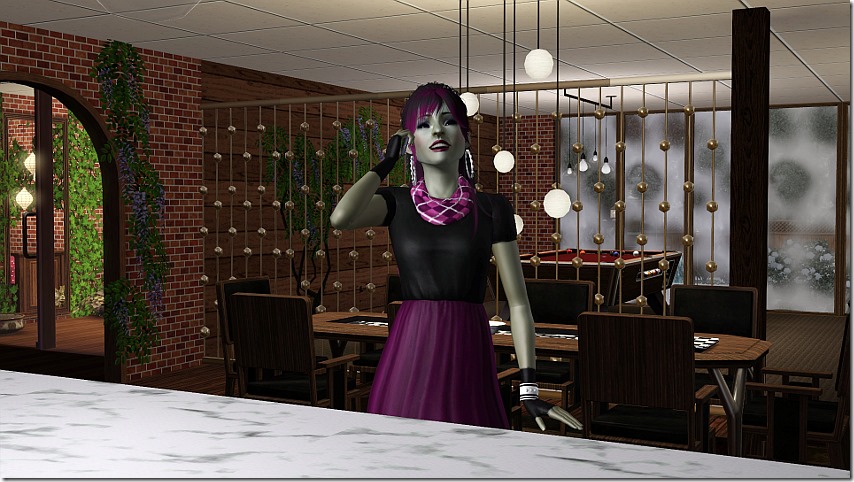 Cal: Yes, hello travel agent. What destination can you recommend that will make me feel young and beautiful and hasn’t been overplayed on this blog?

Champs Les Sims: Because We Couldn’t Go to China™

Cal: Who checked on the kids before we left?

Nice, locked in the icy cavern that has become of the Langurds’ gym (experimental architecture problems). R.I.P. Kip. 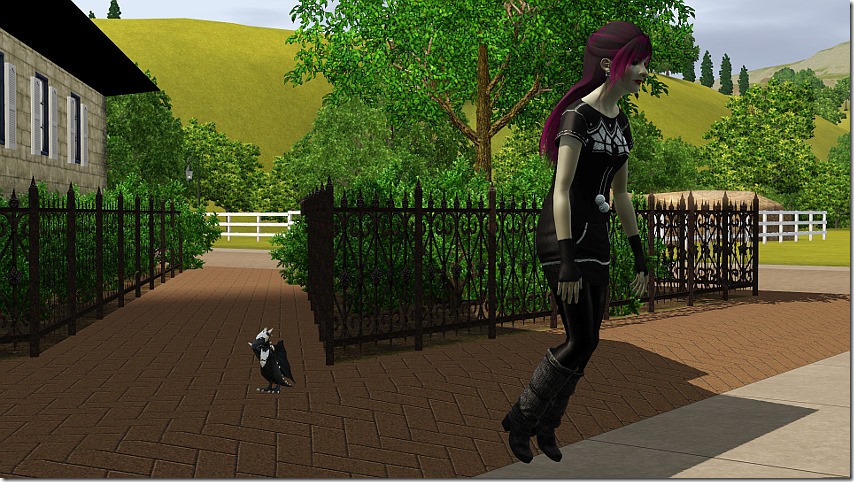 In one fell swoop, our unofficial Mother of Dragons abandons two of her children in the space of an hour.

Calamity: Be good, Blubs. I’ll be back by dinnertime.

What a happy accident that these two seem able to communicate AND look damn good together.

What seems less accidental is that the entirety of Dragon Valley has decided to follow us on vacation.

Ava: What, you think we’d miss a second of this shitshow? 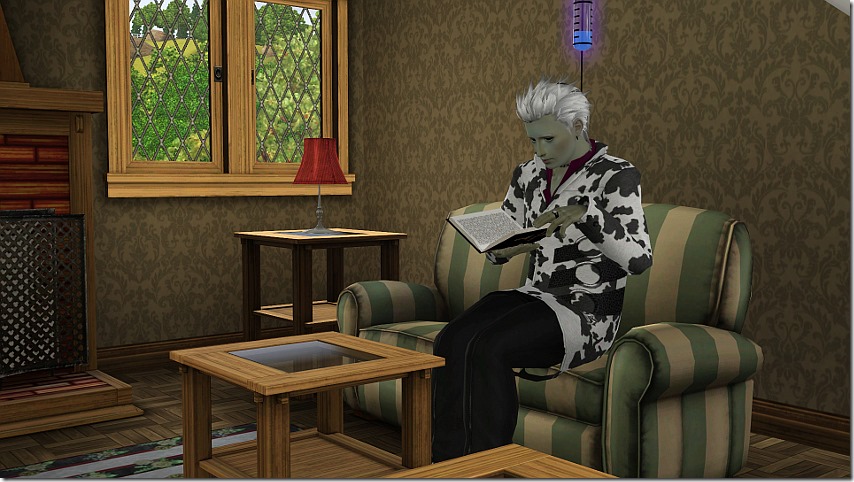 Hate to disappoint, but this shitshow has studying to do. (Not that we came here to buy time or anything…)

Calamity is the only one who’s free to enjoy the local flavour.

Gaston: Ugh, I wouldn’t eat that. Worst thing on our menu by far. 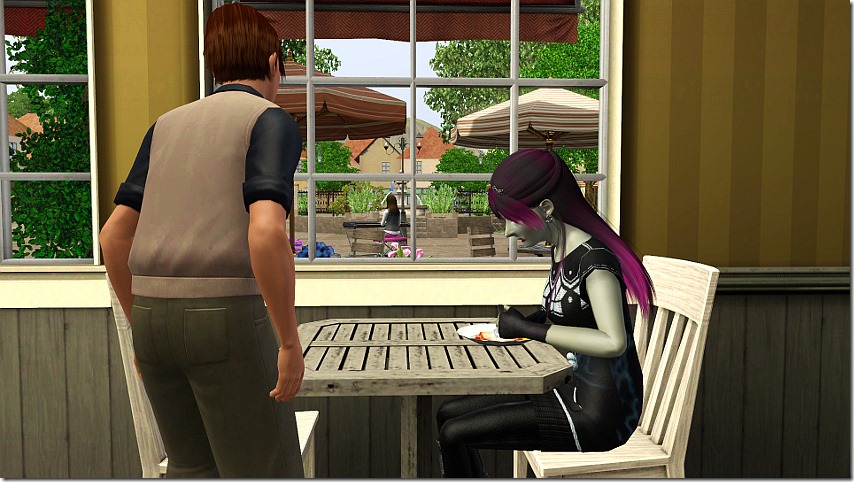 Local: Sacré bleu! Could it really be?

Calamity: *sigh* Yes, it is I, the lady from “Woman Levitates to Hospital in Foetal Position.” Those things go viral fast, huh?

Local: Why, I don’t believe it! It’s Rhapsody Langurd, the musical darling of Champs Les Sims! 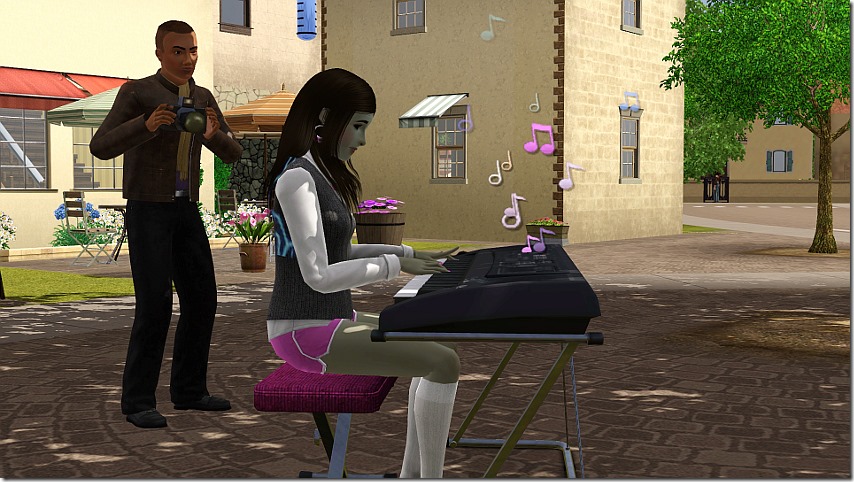 Paparazzi: Miss Langurd! Can you tell me about your troubled youth? How did your time as a child soldier influence your music?

Never would’ve guessed she was such a hit with international audiences. 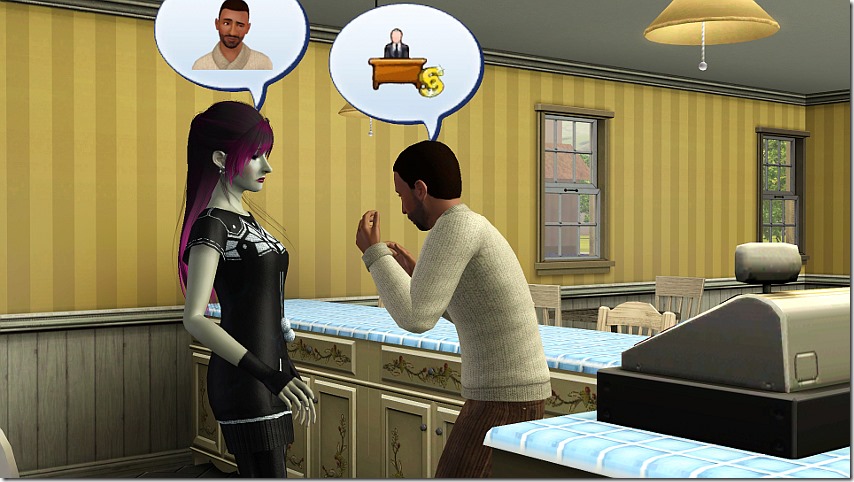 Back inside, Calamity makes the mistake of chatting up the barista.

Cal: So what’s there to do around here?

Gaston: You have to help me, Madame! I’m being blackmailed by a corporate gangster who is threatening to kill my family!

Cal: Why are you telling me this? 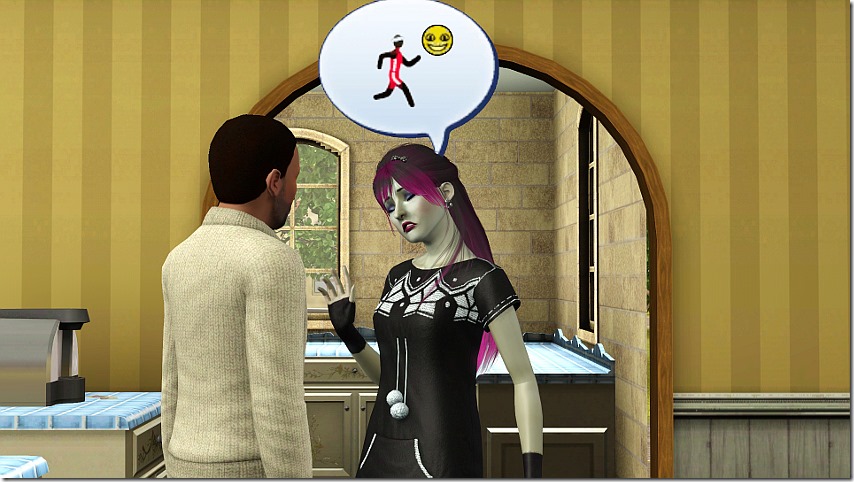 Cal: Look, you probably don’t want my opinion, but I think your problems could be solved with a little exercise and a change of attitude.

Says the woman who calls this exercise.

And then cracks open the French wine to reward herself.

Cashier: Omg! You can’t just walk in here and take what you want! 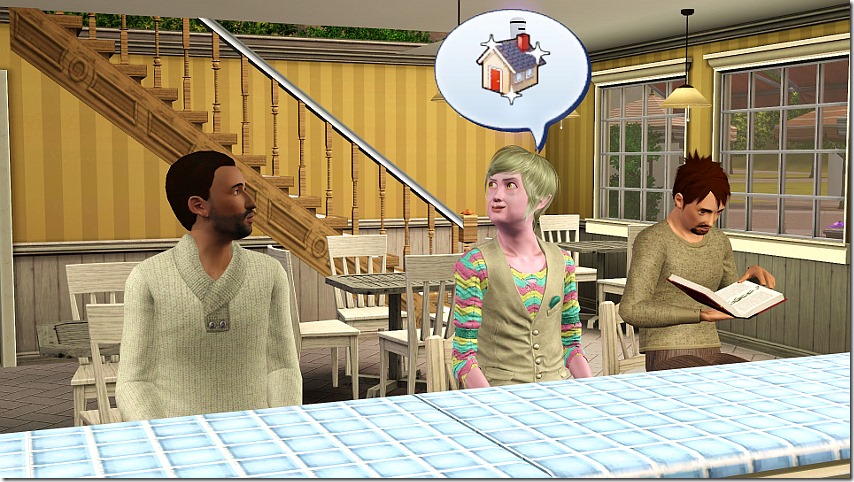 I have Quinn cracking down on his writing skill for all of five minutes before I remember I gave up on his LTW, so he’s basically one step behind Calamity in his France adventures.

Yves: Shame it won’t be around much longer, right Gaston?

Gaston: Please, I don’t have anything left to give you!

Quinn: Welp, you fellas have a nice day. 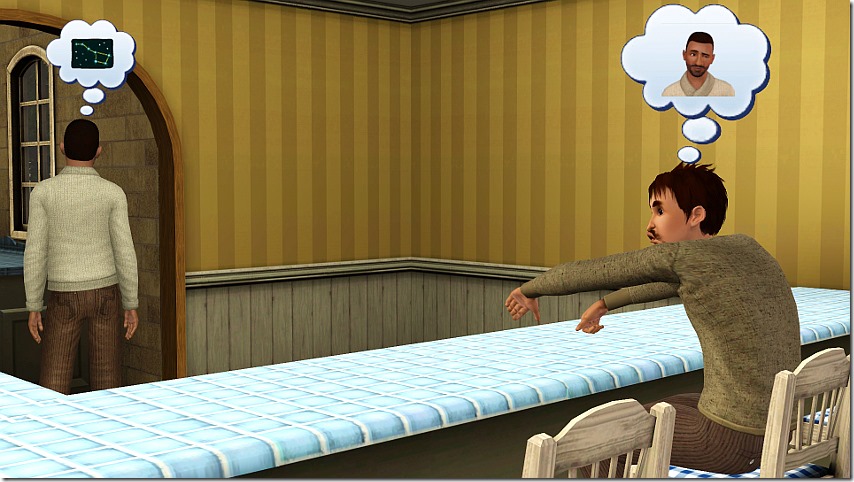 Yves: I will bring your empire to ze ground, Dutiel!

Gaston: What empire? Why have ze stars forsaken me? 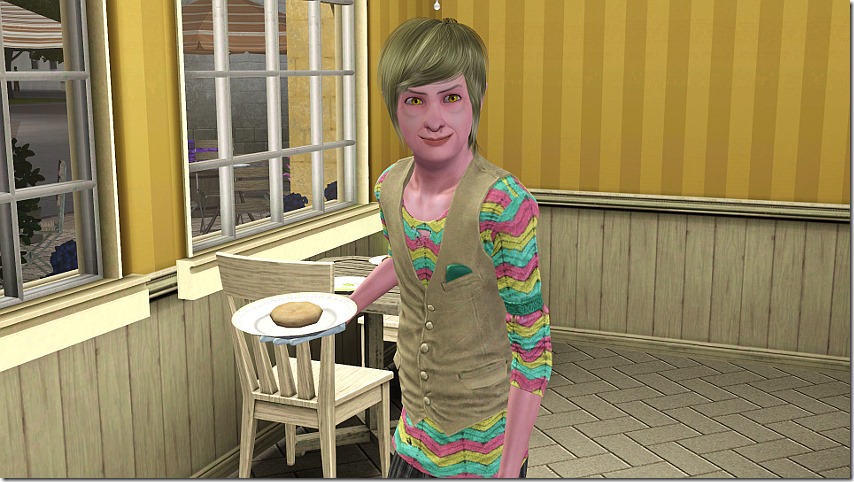 Also, this was my first time seeing a bagel in the Sims so I thought I would document it.

I’ll admit that part of my agenda in coming here was to scope out new genetics for a third offspring. Quinn has already donated his face to Kip and his skin to Trance, and statistically speaking, we are due for another polygamous generation (current tally is 2-3). Ironically, Dragon Valley has decided to remind us that it can’t be beaten in the genetics department by sending its entire population along for the trip.

Aiden O’Connell: I’ve never been to France before!

And this legacy has never had a real ginger—CALAMITY, GET IN HERE! 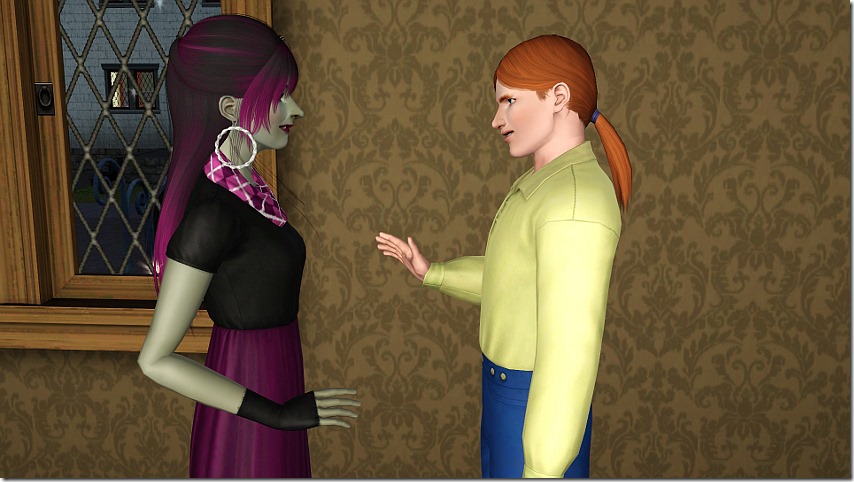 Cal: Oh, you ARE pretty.

Let’s study that jawline from a few different angles, shall we? 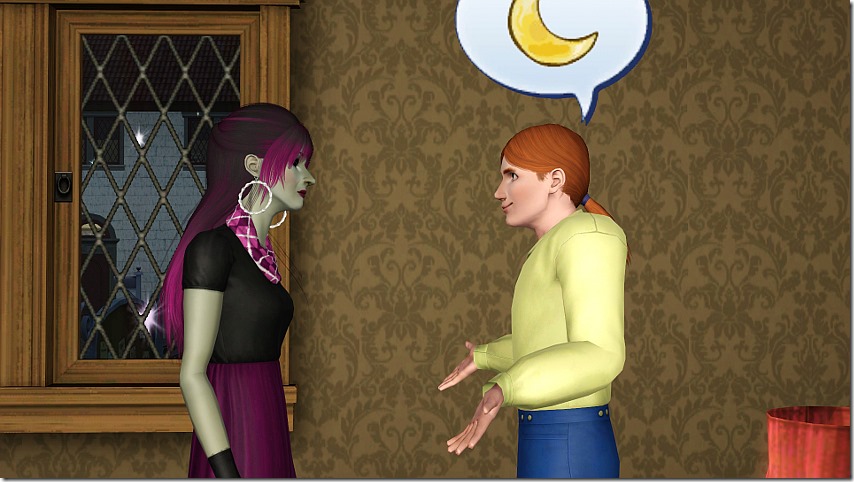 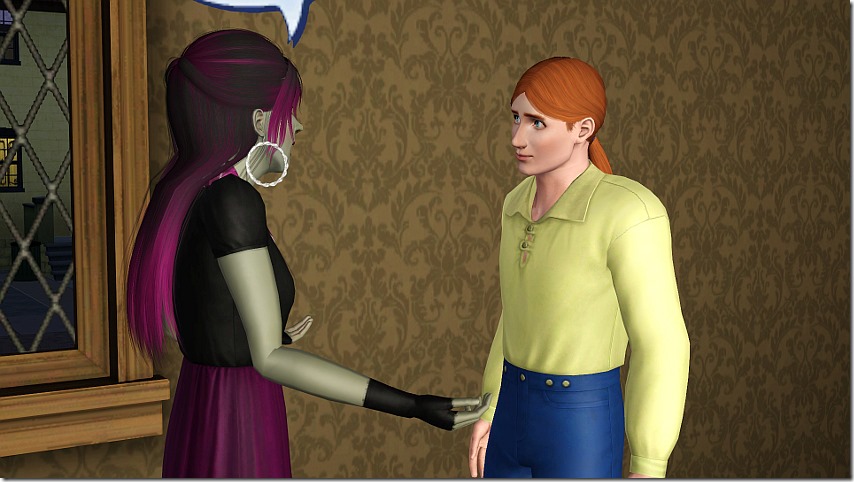 Cal: Yeah, I didn’t listen to a word you just said.

Aiden: What’s happening? Did I just join a cult again?

Among our squadron of DV tagalongs is Sophie Dwyer, Crash’s only friend from high school. Running into each other in France means a totally different kind of reunion.

Looks like even the family mute can’t keep his feelings hidden.

Here we see the final stages of dragon neglect.

Cal: Oh, don’t be so dramatic.

Cal: Hey, now that I’ve vamped up the stove, someone should make some fancy French food. 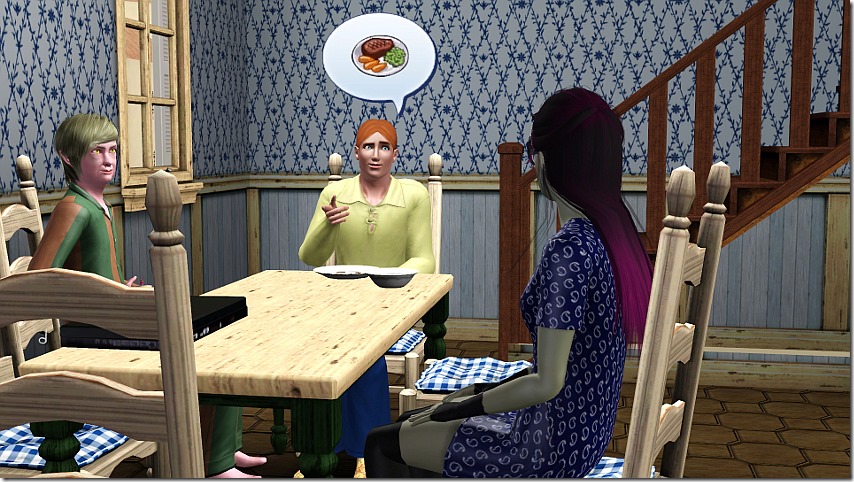 Aiden: I don’t know about French food, but I do a mean meat and potatoes.

Quinn: What a thrilling and exotic affair you’re having.

Things get tangled a little sooner than expected, but that’s okay.

Aiden: That man is your husband?!!

Aiden: But you called me pretty!!!

Not everyone is so okay with it.

Rhapsody: You are so dumb! You have a perfect family, but of course you’d go gallivanting on a forbidden tryst with a guy who’s not even French!

Cal: Remember, it just takes one click to send you back to You-Know-Where.

Cal: Chill out, I’m messing with you. Adults can’t go to military school.

Rhapsody: SHADOWS OF MY PAST 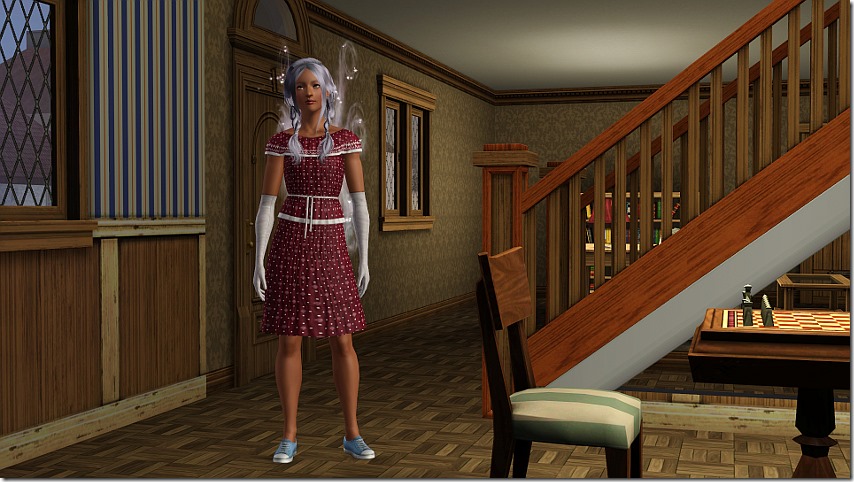 Skydancer: Stop. You don’t have to segue into every screenshot.

DON’T KNOCK THE SEGUE LIFE. Also go home, no one invited you.

Skydancer: Okay, but put the walls up on that staircase first.

After one day of socializing, Calamity feels comfortable enough to guard her prey watch over Aiden while he dreams about typical manly things.

Thanks, Cal. I love dodging around innuendo so that you can walk straight into it.

Whether Aiden feels comfortable with this is up for debate. 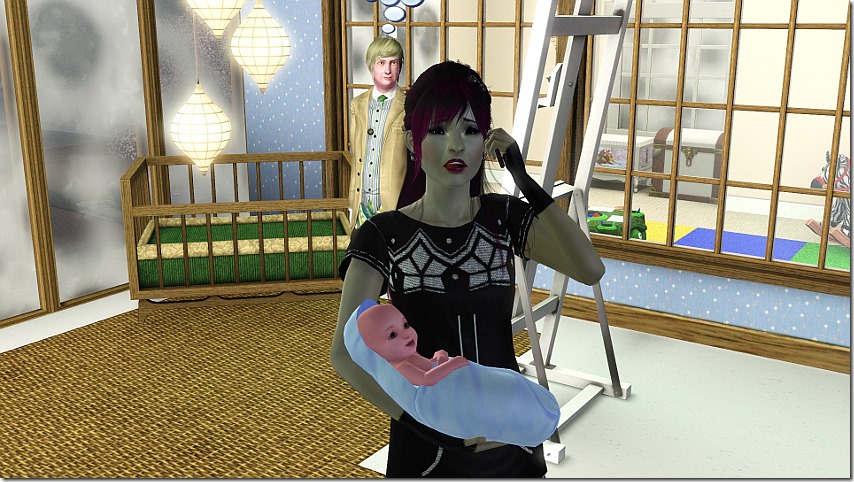 Pointless Vacay comes to a close, and how convenient that our new foreign friend actually isn’t foreign at all!

Cal: So my husband’s out of town…

He falls for it, but the reluctance is palpable.

Aiden: I don’t know why I came here. I don’t actually remember leaving my house…

Cal: Maybe you should figure your life out before we take this any further. 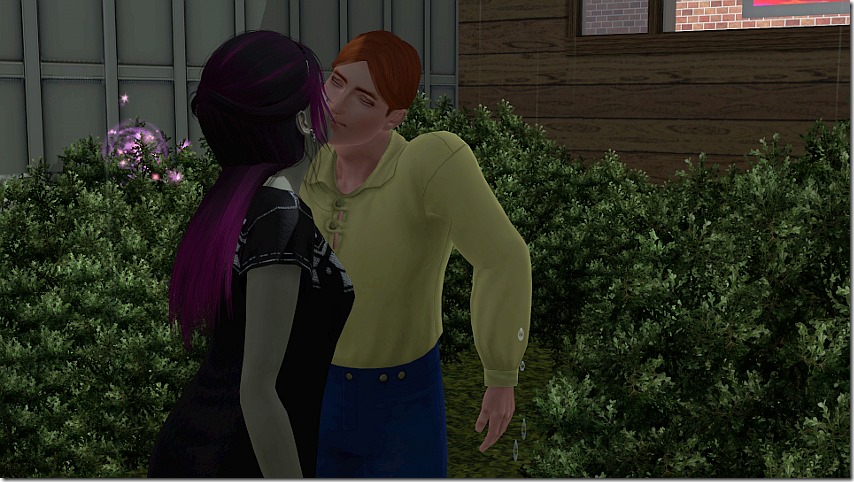 Cal: Or maybe you should shut up and kiss me.

Aiden: I… I guess I could do that.

Under the pretence of taking shelter from the rain, Calamity lures him into the one-purpose-and-one-purpose-only hot tub.

Cal: I love these boots, don’t you?

Aiden: If you love them, shouldn’t you not wear them in the water? 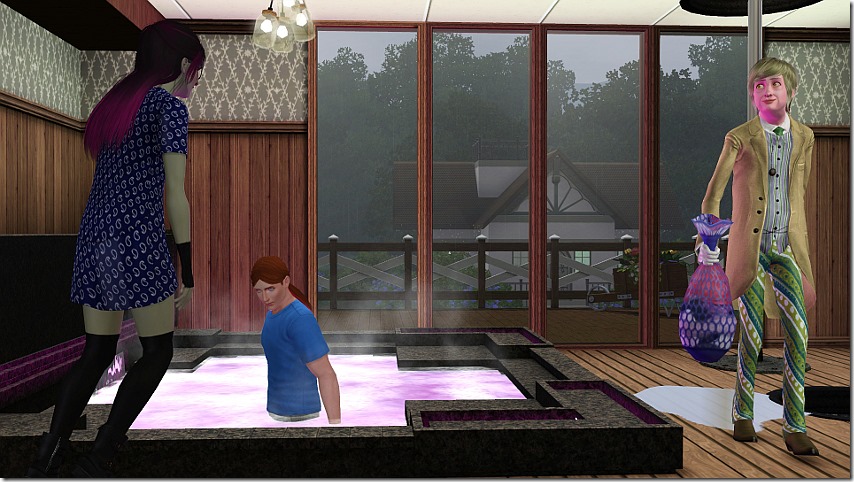 Quinn: Tut tut. You won’t last long around here with sensible talk like that. 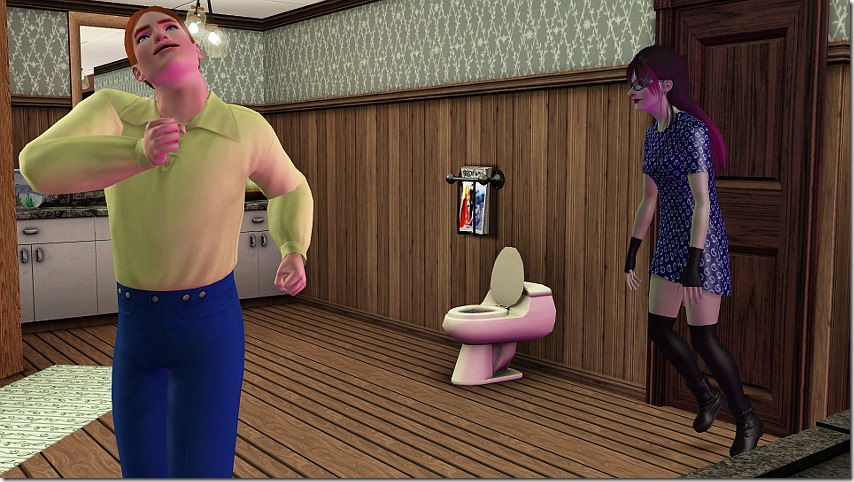 Aiden: Why am I walking like this? Make me stop!

Aiden skedaddles and leaves this odd couple to talk things over.

Cal: To be fair, you’ve done some pretty slimy things since we got together.

Quinn: YOU HAVE NO EVIDENCE OF THIS 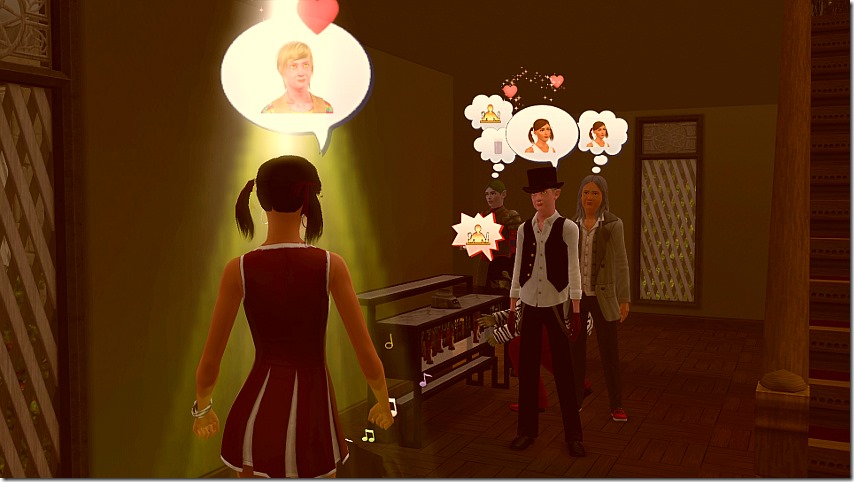 I knew that filter would come in handy.

Cal: So what, I guess we get divorced? 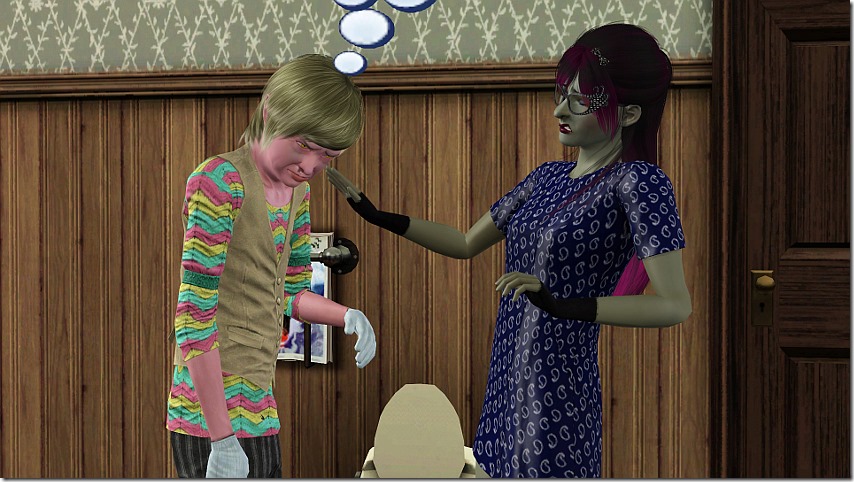 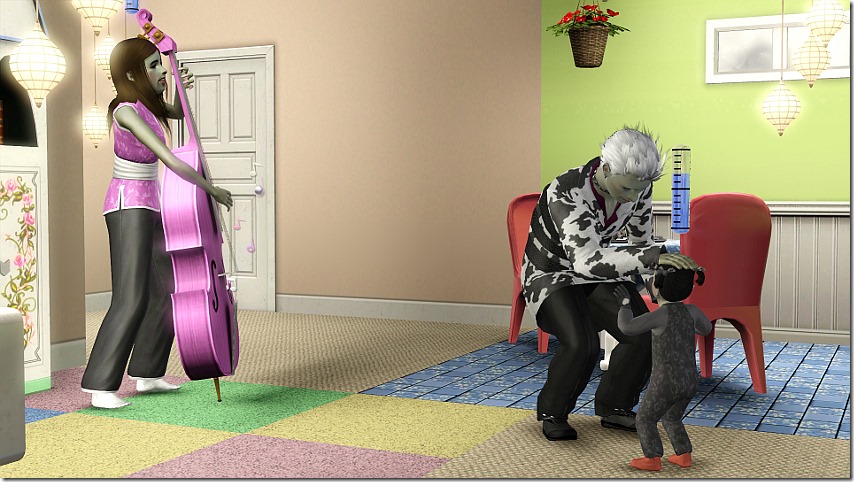 Good guys Rhapsody and Crash put up a smokescreen so Kip won’t hear the sound of her parents’ marriage crumbling.

Crash: *teaching her how to squat* 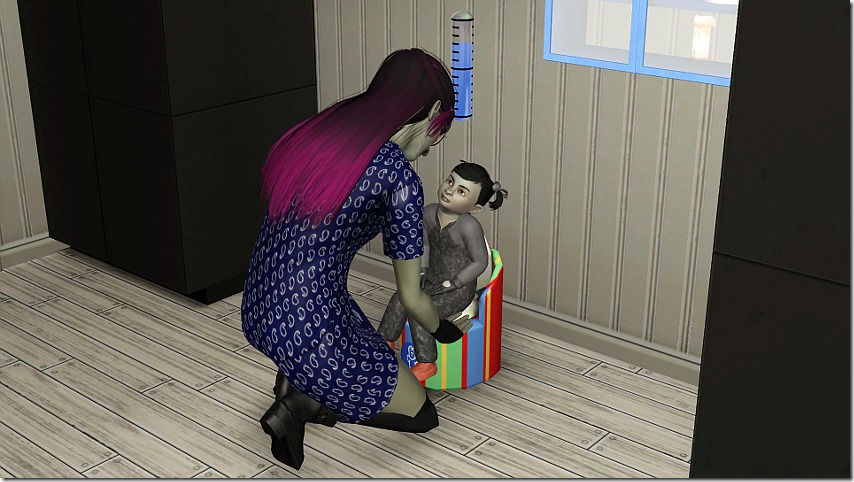 Only for their hard work to be immediately undone. 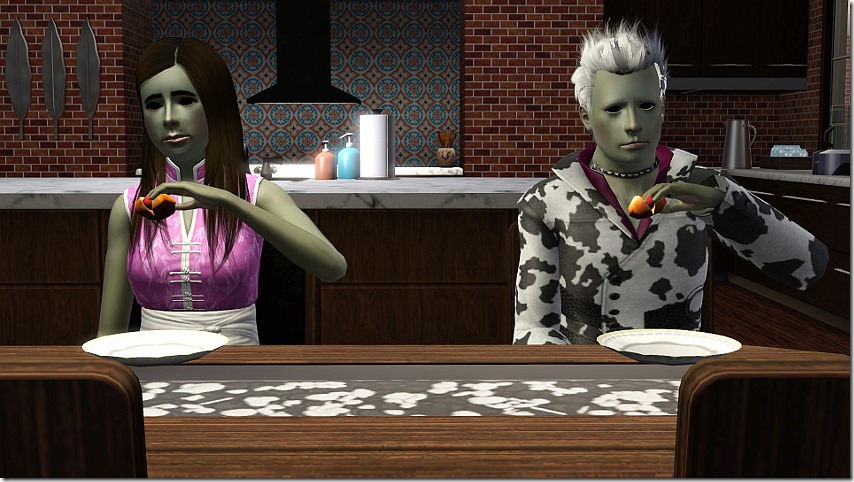 The faces of two people who tried their best.

Poor Trance, though—it’s hard to soften the blow of your parents splitting up on your birthday.

Buzz: So you won’t mind if I stagger through your birthday cake with this breakfast tray for no reason?

Trance: Not at all, go ahead. 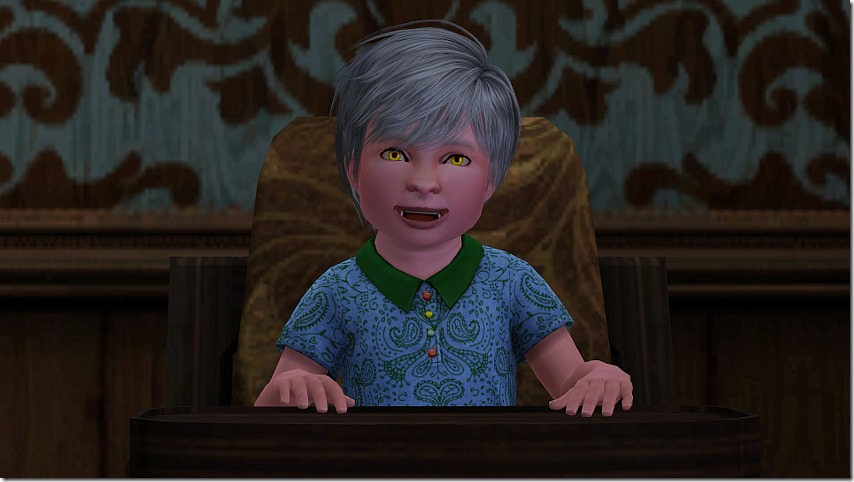 To hell with Falafel, god rest his soul. This is what I call variety. I see the Langurd jaw is alive and well—and so is Frieda’s hair!

Trance: Why would you even need another kid after me?

Calamity: You were saying?

I guess one more couldn’t hurt.

Trance: I see how it is. *prepares for the life of a middle child by crawling into a box*

Oh man, I haven’t had this much fun with a Langurd chapter in a long time. Is it okay to say that when my main characters just got divorced? Better than enjoying dead babies, at least. In light of my failures, I want it to be known that the day I squandered was spent scraping together one of these for an Etsy customer, which I hope will redeem me in nerd points if nothing else. If not—well, I tried.

Thank you all for believing in me and for your wonderfully detailed commentary! I shed a tear every time a novel pops up on my phone. ❤