Hello, and welcome back to the Langurds! For real this time – no more filler bullshit. If you don’t believe me, take a moment to breathe in the scent of decaying tofu dogs and evaporating brain cells.

Turns out I remember zero things from last generation, but I do know that there was a terrible, awful, very no good heir poll and y’all panic-voted this box-headed fool into leadership. I think we will regret this soon, but for now it’s full steam ahead! 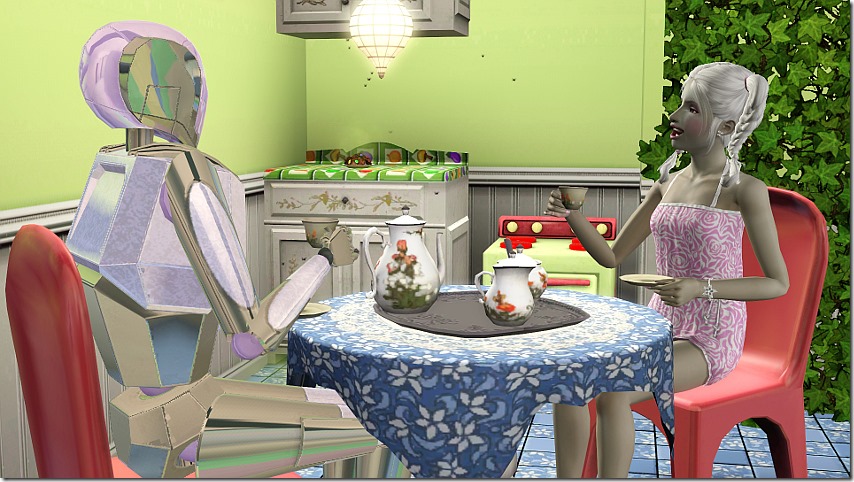 Commence the celebratory tea! (I hope she showed up on time)

Prototype: God help us all.

Siesta: Since I’m in charge and stuff, I’m going to rename you Siri.

Siesta: Don’t be silly, Siri. You answer my questions, not the other way around!

Siesta: Siri, what is this?

Siesta: And Siri, who am I?

Siri: Trust me, I know everything. 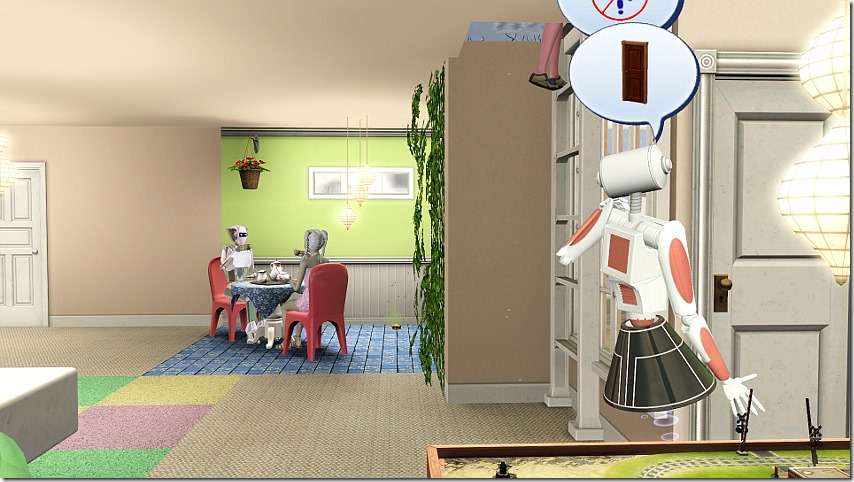 Sailing is smooth – until the screen-shaking zap of doom strikes 89 times and a slew of interdimensional visitors floods in through the ceiling.

Daisy: Master, this is it! I’ve found a dimension with no boundaries! We can finally be together!

Renee: Splendid, Daisy! Prepare to make camp in the shrubbery!

Siesta: Do they think we’re…

Siri: This is humiliating.

It just wouldn’t sit well if she wasn’t a Langurd.

Renee: What are you staring at?

Yes, her features bode quite well for Trance’s current relationship. You just can’t trust townies to have standards these days.

I did promise more majestic swan Trance regardless of poll results, so here. He’s yours. Take him. Take him far away.

It’s been a whole year (plus one chapter) since we’ve seen our retiring heiress, and well, you still don’t get to see her because she’s getting old in a corner (a time-honoured tradition).

Trance: Psych, you got old!

Cal: How flammable are these sleeves?

Rhapsody: Excuse me, but can we please acknowledge the bomb you dropped last chapter?

Oh hey, Preggo McSpare-o. Would you kindly move, I need to give your sister a makeover. 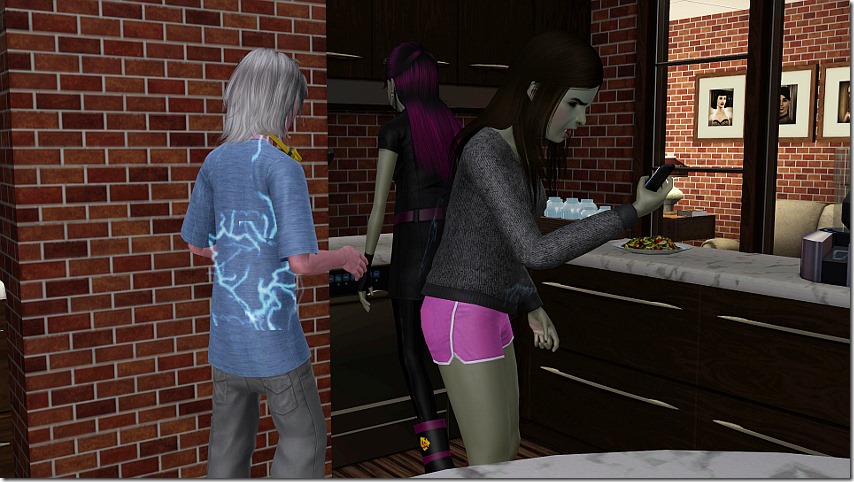 Rhapsody: Fine then, I’m selling it to goblins.

Calamity: Thanks, I did it in the dishwasher.

When I opened the game and remembered that Rhapsody was pregnant, I groaned and sent angry vibes to my previous self. I hope she felt them. 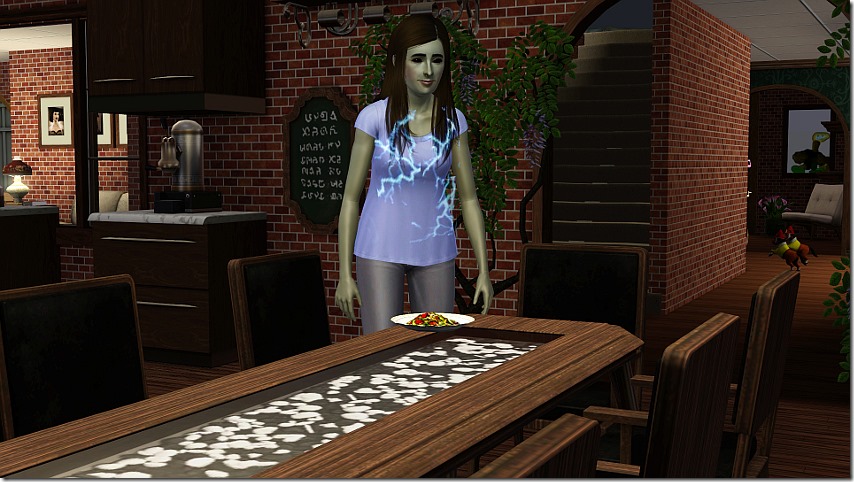 However, with Siesta just turned teen and babies far on the horizon, it seemed like a good idea to keep this potato and her fetus around. I am now sending more angry vibes to that previous self.

Rhapsody: I will eat salad and make this kid normal.

Dude, I would honestly just pray your labour doesn’t take as long as you spinning into maternity wear.

And maybe say a little prayer for this hunk of not-quite-father material.

Breandan: Tiny equines, heed my workout plan and ye too can be the fittest in the realm!

Cal: Instructions unclear. Where are my legs.

So I worked out this stay-at-home firefighter business, but it turns out the only available space for Cal’s engine is in the mausoleum. It also turns out that the more time she spends down there, the more fucked her routing gets. A small price to pay for no more workplace harassment?

Cal: I have no idea what I’m prodding right now.

Cal: Does this thing fit in the elevator?

Okay so it’s a pretty big price and the town will probably burn but ANYWAY.

If you’re ever feeling forgotten or displaced, just remember that Storm still exists.

Yes, I mostly do not remember that Storm still exists.

WHY WOULD YOU PROLONG YOUR SUFFERING YOU MASOCHISTIC BEAST

Hey, remember when I said you could forget all about the prologue because none of it mattered from this point on? 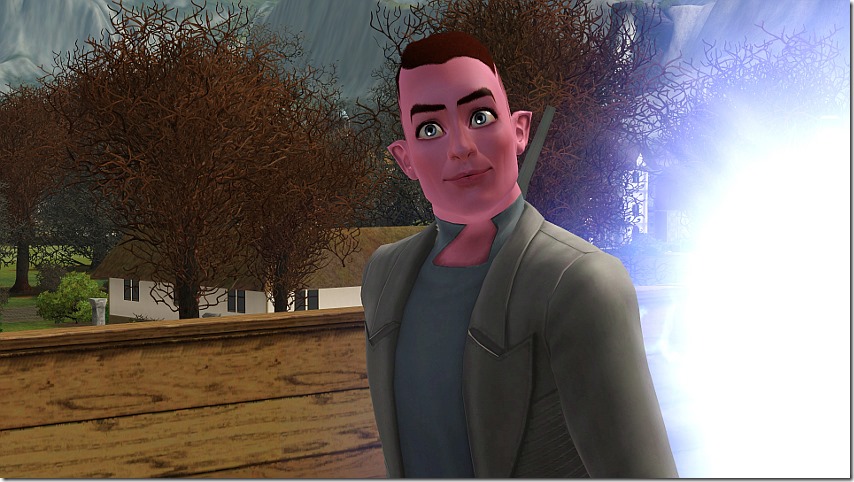 Chin-Han O’Reilly-O’Connell: You’ve been fed a lie. I’m here to reclaim my future. 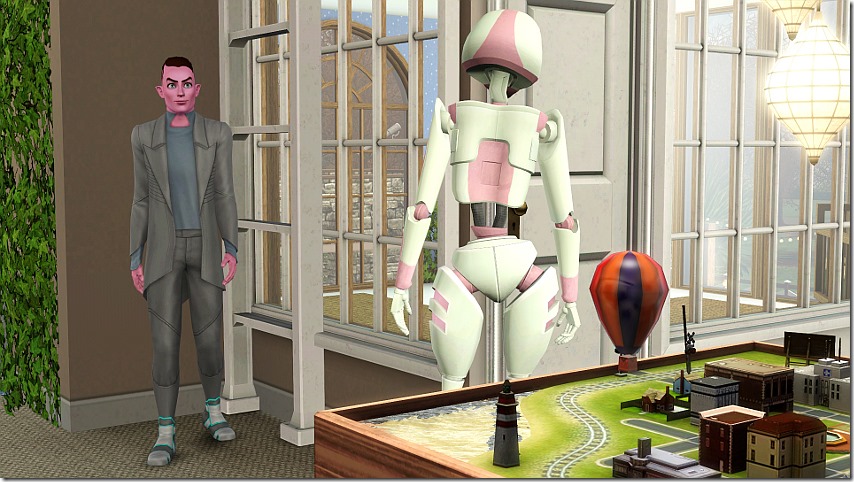 Robota: Ten-four, boss. Where do we start?

Chin-Han: Look for the most handsome person here, of course.

Robota: Right. How stupid of me.

It’s kind of comforting to know that a thousand years later, no one has gotten any better at naming plumbots. 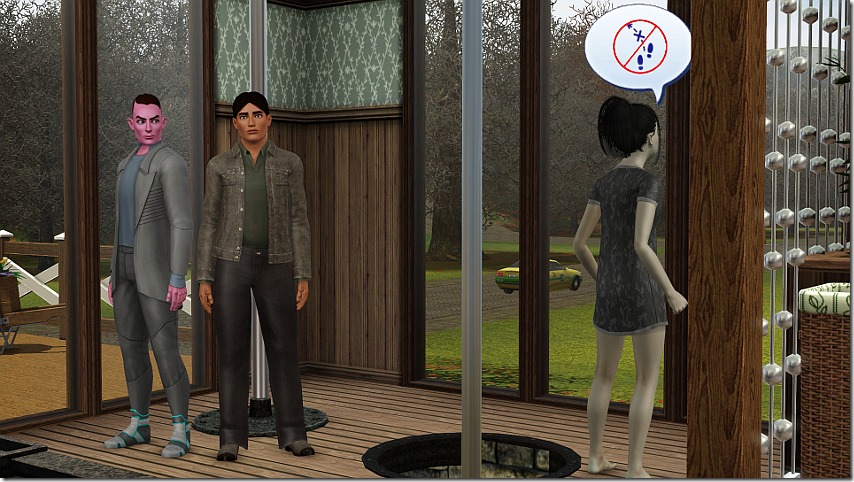 Kip: Can you all go home, please? This is Dragon Valley, not Silicon Valley.

Chin-Han: It will be soon be Mithrilen Valley if you don’t join me.

Chin-Han: We can get Dark Marks.

Kip’s not a fan of clashing aesthetics, yet she insists on riding the Beast to school. #hypocrite

No and please don’t try to make that a thing. 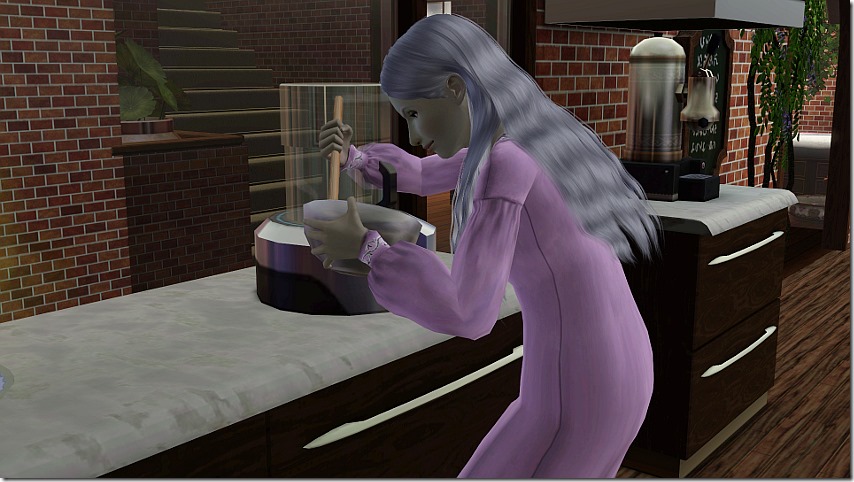 Like many before her, Siesta may have some delusions about what it means to be a Langurd heir.

Siesta: Uh-oh, I think I skipped a step…

You idiot, not on the— 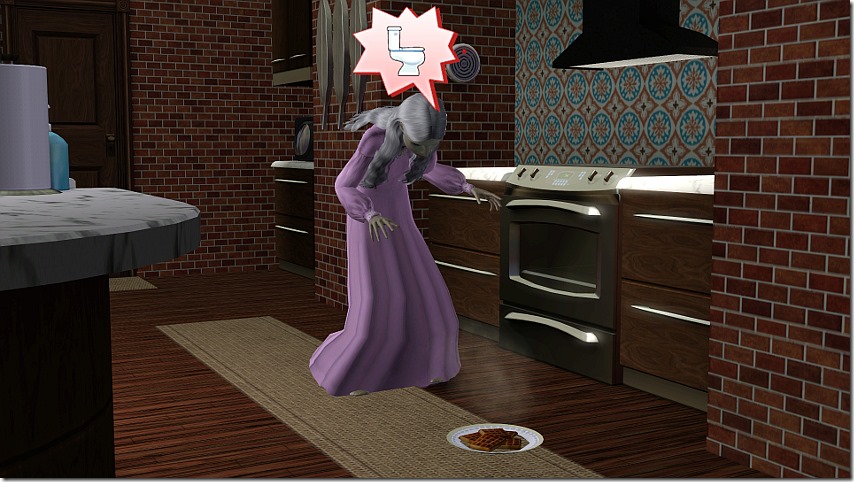 This is going straight into the history books. #perksofbeinganheiress

This poor basement creature wanders up obliviously, still stuck in underground lighting mode, to a plate of Siesta’s creation.

Siesta: Gee Mom, who pissed in your waffles?

Calamity: Apparently you did. 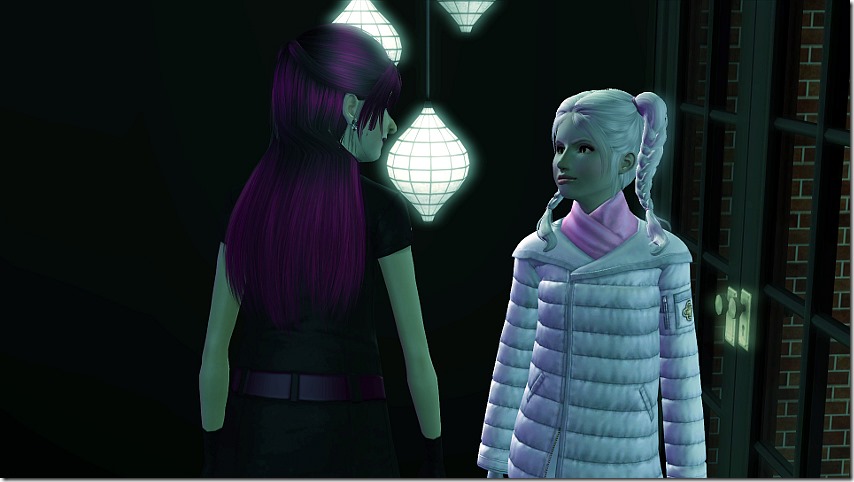 Siesta: So like, when do I get my own bot workshop?

Cal: Back off bitch, the mausoleum is mine.

Don’t worry girl, I got you covered!

Siesta: But all I did was press “on”!

The lighting up here is just as bad. Someone remind me to get that full moon mod, dammit!

Cal: Hey these waffles have a really unique flavour.

For shame Calamity, how did you get fooled twice?!

And it all comes crashing down.

Fact: despite my talk of Elegant Swan Trance, I actually had no idea this was a moodlet that existed.

I do now and my new favourite thing is to juxtapose it with wildly inelegant moments. 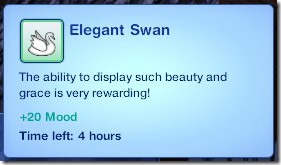 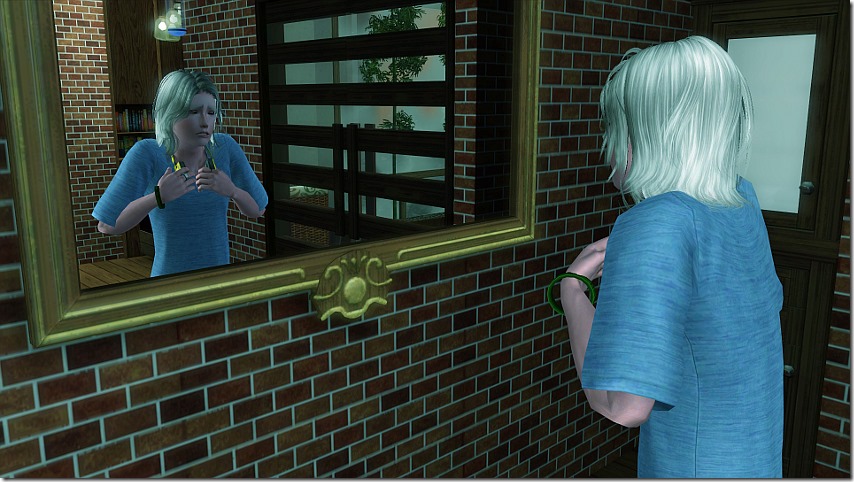 Trance: Tune out the haters, old boy. Let’s put on some Debussy and reflect on our strengths.

Our little Malfoy basically lives his life in a mirror.

Anyway, Trance had better pick up his game if he wants to seal that bright future. I mean, Delilah’s a receptionist now. She’s too good for him already.

If Kip was worried about clashing aesthetics before, Siri’s new charging station might just break her.

Sorry – Siri’s new charging station might just break Kip. Though right now I wouldn’t mind if it broke you too.

In case you’d forgotten, Rhapsody is still here because she’s really bad at her LTW, One Sim Bad. Yes, that’s One Sim Band but the typo happened and who am I to challenge it?

Siesta: How are you still this terrible?

Poor Kip doesn’t get up to much these days. She’s a straight-A student holding down a part-time job and generally being as un-Langurd as possible.

Kip: That Chin-Han guy really has another thing coming. How can he ask me to betray my family? 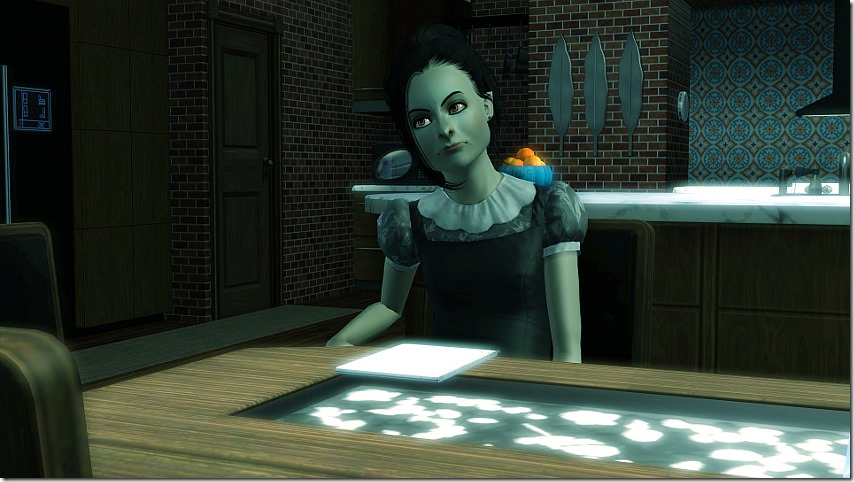 Kip: But you know, maybe he has a point. Why shouldn’t I be running this show?

Please girl, you are successful and attractive. You have your pick of literally any other show to run.

Speaking of successful and attractive – Kip’s promised RI has big dreams. Soon we will have her in our grasp and she will flush them all down the toilet. Muahaha.

It’s possible I felt a little bad about relegating my heirs to the darkest corners of the lot, so I… built some more dark corners, apparently. Welcome to your very own firehouse, Calamity!

But you haven’t even seen—

As a refresher, Calamity is now King of the Firefighters but has logged very few official rescues thanks to my buggy game. I made the executive decision to add every rescue I’ve documented to her LTW tally, and to start generating some emergencies since my game produces like one a week on its own.

As another refresher, firefighters don’t really rescue people. They just jump on trampolines all day. 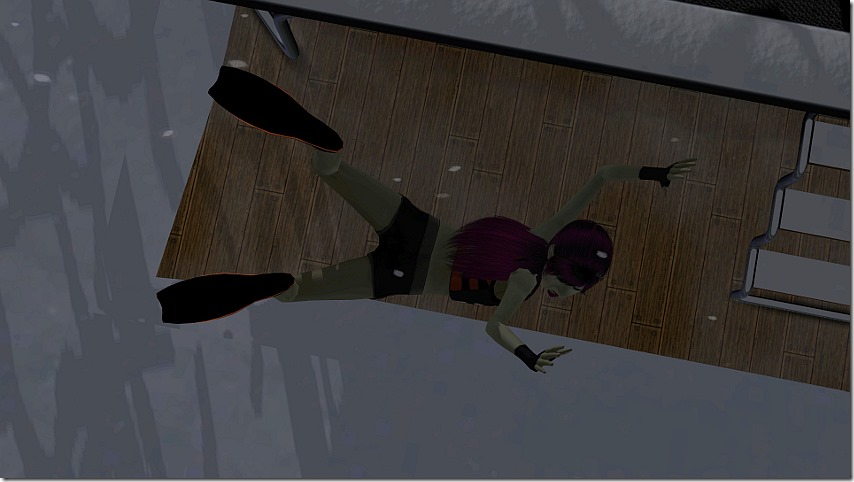 I want to argue that logic but hey, it’s better than a bikini top. 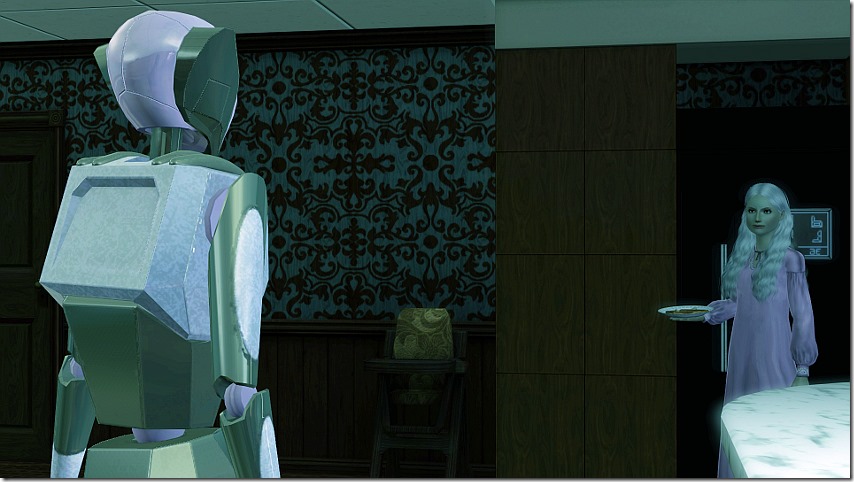 Siri: I’m sorry, that didn’t compute. Try phrasing it as a question.

Siesta: Hey Siri, will you try my waffles? 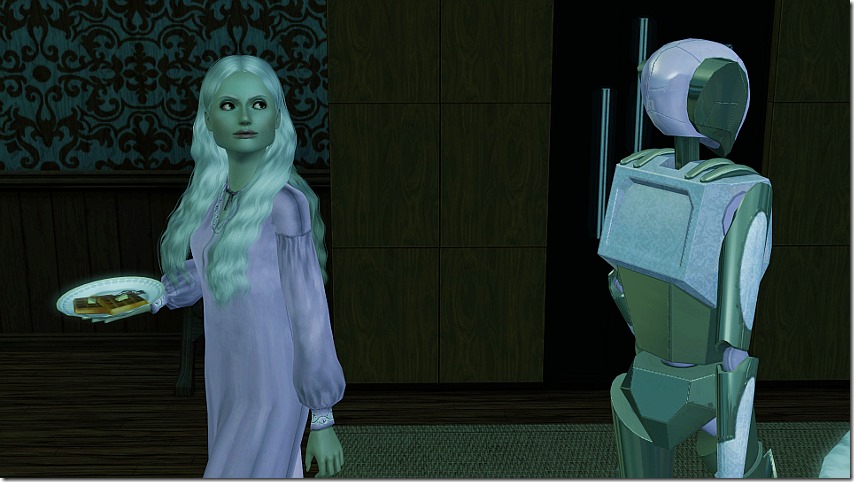 She did, and after an impressive sprint to the school bus, actually made it in the nick of time. Except…

So I tried to send her on a frozen bicycle journey of death, when suddenly…

Where are Kip and Trance going, then? 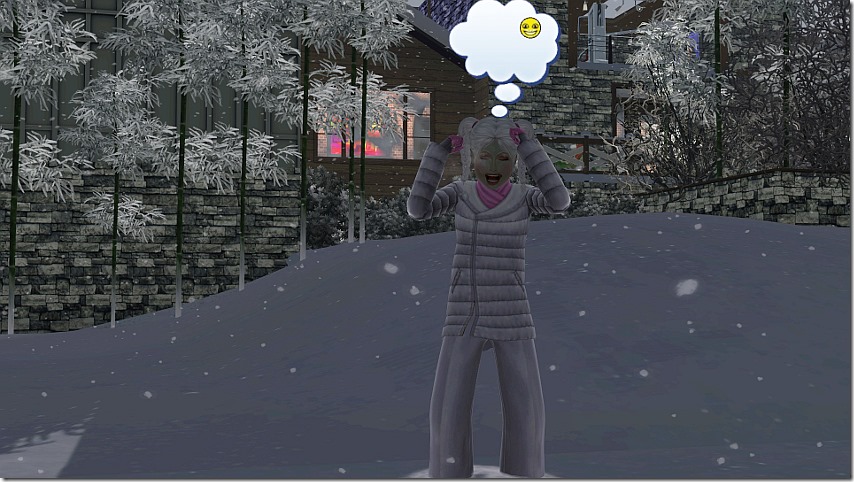 Siesta: Who cares? Best day EVER!

I think I gotta hand her this victory. Go frolic, little one.

WELL WAY TO RUIN IT, SIRI.

Siri: There must be a bug in my system because my processor just skipped a beat.

Breandan: I am from the Middle Ages.

Praise the Seven, it works!

(You know you have suffered when a properly functioning game makes you bow to fictional gods.)

Trance: There is nothing godly about this hour.

RIP to our resident Light Sleeper.

I feel like Trance is just moods at this point. 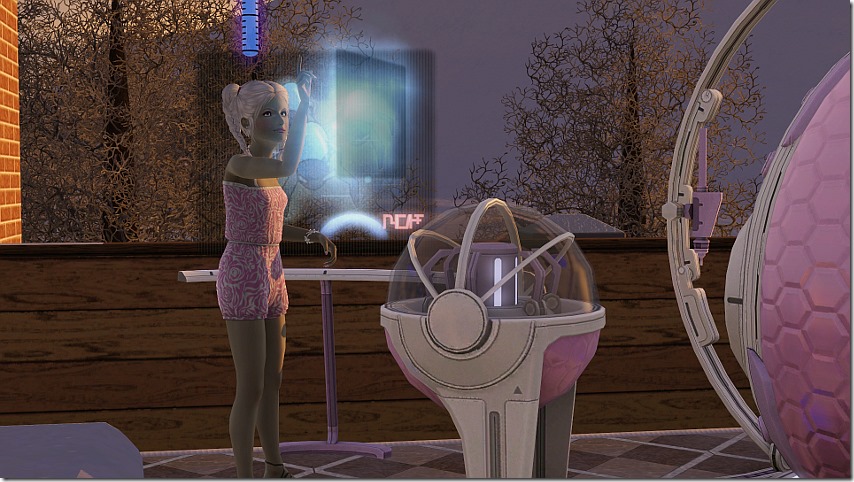 Siesta spends her snow day messing with the bot machine. Outdoors, in a romper.

Siesta: I got to the menu screen this time! 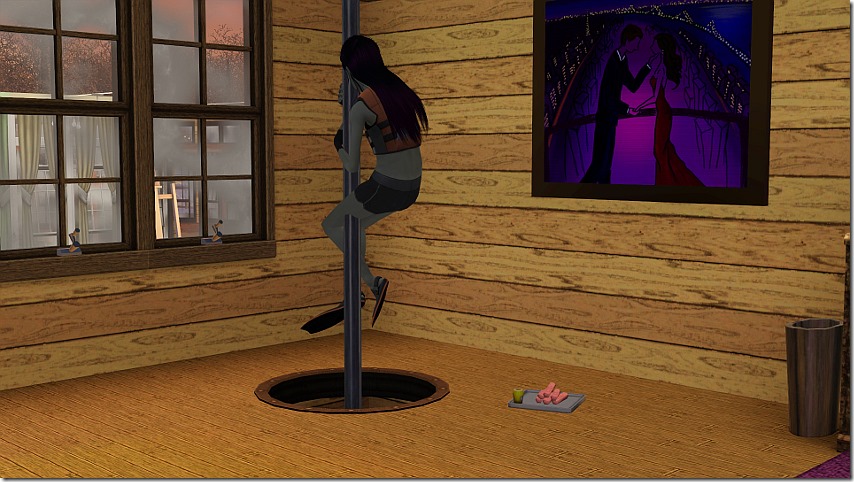 Here I am thinking Cal’s firehouse is the solution to all our problems. Then I leave it alone for a few hours and suddenly it’s a routing vortex filled with uncooked hot dogs.

Calamity: The microwave’s downstairs and I can’t carry stuff on a pole.

Kip secretly ages up on Snowflake Day, next to a unicorn, into this eerily wintry outfit.

Kip: Are you even surprised?

The thing is, no.

I am mildly surprised by this – and bitter that I don’t live in a world where checkout chicks make a better bonus than police sergeants.

Oh, before I forget – Kip rolled Perceptive as her fifth trait and locked in “The Visionary” for an LTW. Because I hate myself and yes, she’s staying a while.

As Snowflake Morning dawns, the parents-to-be are sound asleep, waiting for the telltale early wakeup. Surprisingly, Breandan seems to sense something even before Rhapsody does.

Rhapsody: What an intuitive father!

Breandan: Yes, I am calling regarding the absurd mistake with my bonus.

Boss: Ah, well you see, it wasn’t actually a mistake. The board feels you lack commitment.

Breandan: THAT IS PREPOSTEROUS

Siri: Am I more attractive if you think of me as a suit of armour?

Breandan: That depends, is there room for a person ins—

All this while his girlfriend is labouring away.

Breandan: Do you know how to wield a longsword?

I’m with Siesta on this one. Robots are the worst.

This is Siri’s wish, mind you, not Breandan’s. The fool barely registered his daughter’s birth, but his new flirt’s already got her eye on step-parenthood.

Around this time, two children are born to our enemies. Kate Eames-Mithrilen is Dusty’s niece, while Rae O’Reilly-O’Connell is Siesta’s half-sister. IT BEGINS. 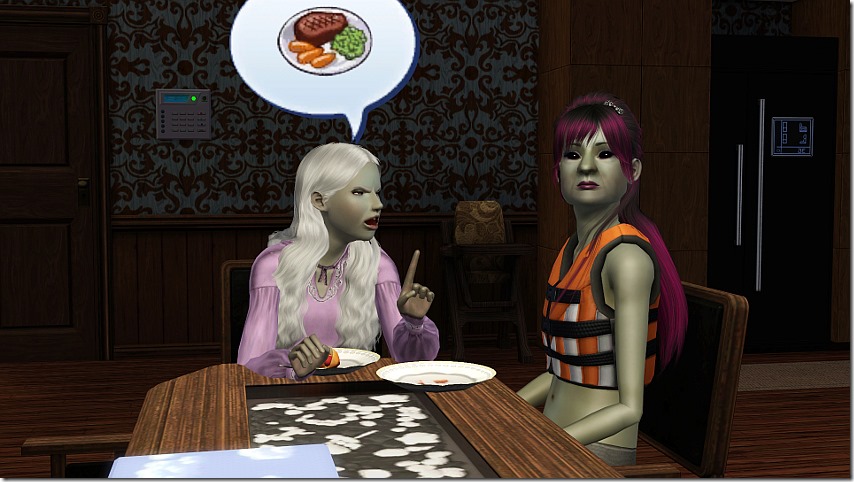 As much as I love this kid, I think we’re all hoping this little power trip of hers gets derailed soon.

Siesta: Don’t you think it’s weird that I’ve never seen a vegetable in my life? Like, what does a broccoli look like?

Calamity: Did I make her this way? 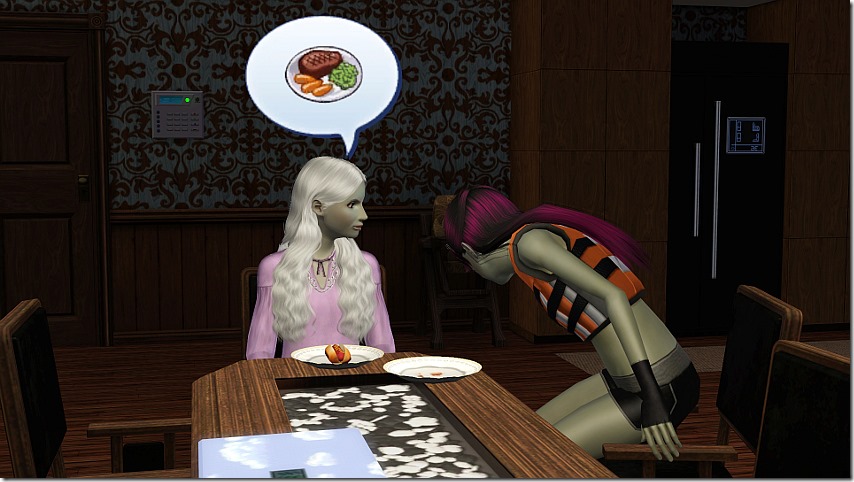 Siesta: But seriously, have we thought about investing in some kale?

Calamity: Sure, let me go buy some.

Siesta: I deserve this.

I, on the other hand, do not deserve any of these:

But of course I am beyond thrilled to be able to say that the Langurds defended all three of their Golden Plumbob titles! Big thanks to Livvielove over at Boolprop for organizing this year’s awards, and to everyone who voted – y’all might just be the most loyal readers around. ❤

What do I know of loyalty, though? As we speak, I’m considering peacing out of Canada for a year and thus tearing myself away from all things gaming, but more on that if it develops.

Comment replies are still a thing and will happen imminently – for now, Happy Simming!